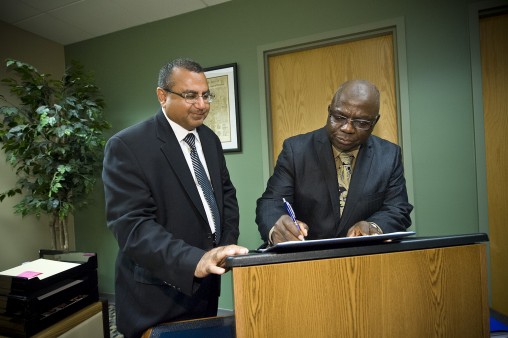 “You have a tradition in Dayton,” said Hagher, Nigeria’s former ambassador to Canada and Mexico. “The Dayton Accords were signed at the Hope Hotel. That was just one reason we saw Dayton as the perfect place for this program.”

The 1995 Dayton Accords led to peace after more than three years of war in Bosnia and Herzegovina. Hagher and Wright State University Center for Professional Education Director Vikram Sethi, Ph.D., hope a similar degree of political success can be achieved in Africa, starting with the Executive Certificate in Civic and Public Leadership program that begins June 3-7 on the Wright State campus.

The first program will offer leadership training to 11 government officials from Nigeria.

“This group will be among our next set of governors and senators,” Hagher said. “We want to expose them to the world’s best leadership practices.”

“There are many questions we wish to answer,” Sethi said. “How does public leadership in U.S. government work? How are we able to build consensus? How does good get done at every level? How can leaders drive the machinery to do good and what are the characteristics of good public leaders?”

Nigerian leaders have only a limited historical context from which to draw the answers. The nation became a true democracy in 1999 after many years of military dictatorship. It is a country rich in natural resources but short on experienced leadership that would allow those resources to be utilized to maximum benefit for all of its citizens.

“We hope our discussions here will become meaningful enough to allow us a platform for promoting change across Africa,” Hagher said.

“What starts as dialogue among ourselves can later turn out to have been a very important discussion,” Sethi said. “It opens our minds to methods for positive change. Responsible, accountable, educated leadership is not just a Nigerian issue. It’s not just an African issue. But it is a good place to start.”