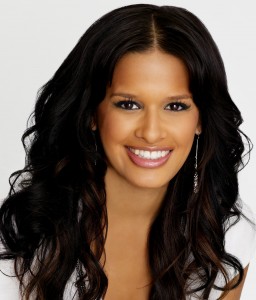 Diaz will be the featured speaker during Freshman Convocation, which begins at 3 p.m. Friday, Aug. 23, at the Wright State Nutter Center. Her talk, titled “It Takes a Village,” will focus on cultivating common ground through community engagement and civic responsibility.

Born in Honduras, Diaz moved to New Orleans with her family when she was a young girl. After graduating from college, she deejayed her way into the tough Texas and Boston radio markets before making her home at Chicago’s Power 92 FM.

She auditioned for Black Entertainment Television (BET)’s New Faces search and was selected as an on-air host, beating out more than 5,000 other competitors.

From 2006 to 2012, Rocsi co-anchored (along with Terrence J),106 & Park, BET’s flagship show. Seen in 85 million households around the world, the show is one of television’s most influential programs.

In 2012, Rocsi joined Entertainment Tonight as a correspondent.