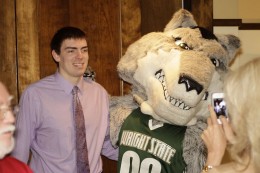 The only thing Wright State men’s basketball coach Billy Donlon lacks is material for his bulletin board.

“I hope you folks from the media will write that we won’t be any good,” Donlon deadpanned during Wednesday’s preseason basketball luncheon at the Nutter Center.

The chances are slim. The Raiders return eight of their top nine scorers from a year ago, when the team expected to finish last in the Horizon League instead won 23 games. Many preseason publications are picking Wright State to win the league, and an NCAA tournament berth, this time around.

“I don’t really care where we’re picked,” Donlon said. “I am glad that we play eight games on national TV. Every night we’re on national TV, someone gets on the internet and looks to see what Wright State is all about.”

The 100-plus who attended the luncheon were all about the upcoming season and higher expectations for both the men’s and women’s teams. 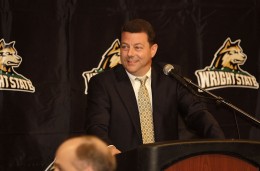 The injury-plagued Raider women were 12-18 a year ago, but bring back 88 percent of their scoring and 83 percent of their rebounding. Wright State will also be bolstered by three transfers who could make significant contributions.

“We are way ahead of where we were at this time last year,” coach Mike Bradbury said. “We plan to contend for the top of the league.”

Junior guard Kim Demmings was second-team all-Horizon League after leading the Raider women in scoring (19.6 points per game) and assists (4.5). Senior guard Ivory James was named to the league’s all-newcomer team. Junior guard Courtney Boyd, who averaged 9.8 points in 2011­‑12, is healthy again after a preseason knee injury sent her to the sidelines last season.

“We’ll have the best backcourt in our league,” Bradbury said.

The men’s returnees include second-team all-league forward Cole Darling, three other players who started at least 20 games, and another who became a full-time starter late in the season. Chrishawn Hopkins, a high-scoring transfer from Butler, will join them in December.

Donlon also addressed the lack of recognition his players received while playing on a team that led the Horizon League in scoring defense, his desire to play crosstown rival Dayton, and the difficulty of trying to schedule home games against “name” opponents. 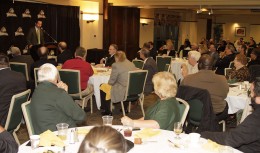 Both coaches listed academic achievement among the Raiders’ top accomplishments so far. The Wright State women compiled a 3.1 team grade-point average last spring, highest in recorded school history. Three of the five senior men’s players are on schedule to graduate in 3.5 years, the other two in 4 years.