Workshop to examine economics, democracy and violence in India 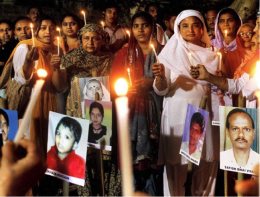 The Wright State departments of economics, English, religion, women’s studies and the Women’s Center are sponsoring a workshop that will examine Indian economic policy and the new controversial face of a regime that some believe condones violence.

This workshop will investigate the history of violence against minorities, particularly those associated with the Gujarat Pogrom of 2002. During this pogrom, Muslims were the target of brutal violence at the hands of Hindus, with Muslim women and children suffering specifically.

The chief minister of the state of Gujarat, Modi, under whose tenure this spate of violence occurred, was never formally tried. His administration is seen by some to have condoned the violence and perhaps even encouraged it. In spite of this, Modi has been popular with the Hindu majority in the country and is heralded as the face of the new economic policy regime in India. He has been recently anointed as a candidate for prime minister of the current opposition party in the country.

Sreenivas’ research and teaching focuses on modern South Asian history, particularly on gender, colonialism, and nationalism. She is part of a team that recently won a grant from the Andrew W. Mellon Foundation to organize a year-long series of events focused on the intersection of language, politics, and human expression in the Balkans and South Asia. She is author of Wives, Widows, and Concubines: The Conjugal Family Ideal in Colonial India.

Mathew has worked with various social movements in South Asia for the past 20 years. He works on software labor markets and Hindu nationalism in the diaspora and has published in several academic journals. He is a co-host of a weekly radio show on WBAI, a co-founder of “Campaign to Stop Funding Hate” and the New York Taxi Workers Alliance. He is the author of Taxi! Cabs and Capitalism in New York City.