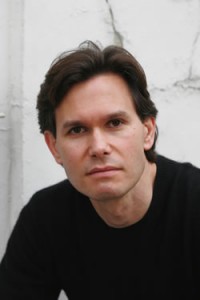 Andrew Krivak, author of the critically acclaimed novel The Sojourn and winner of the 2012 Dayton Literary Peace Prize for Fiction, will be at Wright State University Friday, Nov. 1.

Krivak will offer a peace writing workshop for students, Writing toward Peace: The Sojourn and the Process, at 9:05 a.m. in 341/342 Dunbar Library.

He will then give a free public lecture, The Classical Struggle and Modern Peace, at 1:25 p.m. in the Creative Arts Center Recital Hall in the Recital Hall.

Afterward, Krivak is set to participate in a public panel discussion on the topic, Why Discuss War When the Topic is Peace?, at 2:45 p.m. in the Creative Arts Center Experimental Gallery.

According to Carol Loranger, Ph.D., associate professor and chair of the Department of English, Krivak is in the literary major leagues.

“Simply being able to meet and converse with a writer of Krivak’s standing is an opportunity lovers of literature should not miss,” said Loranger. “For budding creative writers to have the opportunity of workshopping with him should be invaluable.”

Krivak was awarded the 2012 Dayton Literary Peace Prize for Fiction for his first novel, The Sojourn. Judges Alan Cheuse April Smith said that The Sojourn “never so much celebrates war as it does the power of the mind to recall it and the power of language that can describe it, which is the beginning of the making of peace.”

The Dayton Literary Peace Prize is the first and only annual U.S. literary award recognizing the power of the written word to promote peace.

To be considered for the prestigious prize, authors must increase understanding between and among people as individuals or within and between families, communities, nations, ethnic groups, cultures and religions. Considered works must also exhibit enduring literary value and should appeal to a variety of audiences—criteria Krivak met and exceeded with The Sojourn.

“A university has an obligation to serve its local community as well as its students and the communities of scholars with which it engages,” said Loranger.

“As a supporter of the Dayton Literary Peace Prize, Wright State is making Dayton a destination for literary tourism, thus helping the local economy. We are also helping memorialize the Dayton Peace Process and Peace Accords, further cementing Dayton’s reputation as a city of peace,” she said.

Krivak’s appearance at Wright State is sponsored by the Ohio Center of Excellence for Collaborative Education and Leadership in the Arts (CELIA) and co-sponsored by the Wright State Department of English, Creative Writing Committee, Center for Teaching and Learning and Peace Lecture Committee.