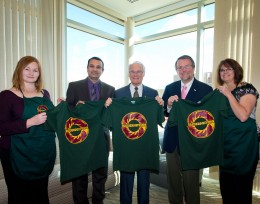 Editor’s note: This is the first of multiple stories in the “A Season of Giving” series, which highlights Wright State’s commitment to the community during the holidays.

Wright State University students who can’t make it home for Thanksgiving will again be able to eat a home-cooked meal on campus this holiday.

A small army of Raider volunteers is working to make Raidersgiving, a Wright State Thanksgiving tradition that began last year, even better. This year’s Raidersgiving will be held Thursday, Nov. 28, at the Campus Ministry Center from noon to 2 p.m. Over 60 students have registered to attend.

“We want to provide dinner, a holiday meal, fellowship and some activities for these students,” said Craig This, former chair of USAC. “We’re not trying to replace what they get from home, just give them a fun environment and a chance to be with others for the holiday at their home-away-from-home.”

International students, independent scholars and students from out of state who live in the residence halls may be among the groups who have few meal options on campus because the dining halls will be closed.

A full-spread Thanksgiving meal donated by dozens of volunteers across campus is planned. Leftovers from the meal will again be stored at the Forrest Lane Community Center where students can access them while the dining halls are closed for the holiday weekend.

This year, students who come for the meal can also play board games and make holiday cards for kids at Dayton Children’s Hospital. Students are invited to watch a movie in the new campus ministry building the night of Thanksgiving and the Friday night following. Students will also be invited to watch the men’s basketball home games on Nov. 27 and Nov. 30 at the Wright State Nutter Center from a special Raidersgiving party deck.

“Last year we had about a dozen students, and I’d like to get about 30 this year,” said This. “But honestly, If we can impact just one student and make them feel like they are a part of the Wright State community, then I’ll feel like the event was worth it.”

According to This, last year volunteers from We Serve U, CSAC, USAC and alumni stationed at the base predominantly staffed the event. This said that he expects volunteers from the same groups this year and has had inquiries from student groups who want to lend a hand too.

Below are photos form Wright State’s first Raidersgiving in 2012.

Series: A Season of Giving