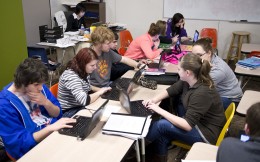 Students at Wright State and the Dayton Regional STEM School worked together to develop their professional writing skills during the Fall Semester.

Students at Wright State University and the Dayton Regional STEM School helped one another develop their professional writing skills in a unique collaborative project.

During the Fall Semester, the students spent several weeks fine-tuning cover letters and resumes based on feedback they received from each other.

The project included Wright State upper-level undergraduate and graduate students in Professional and Technical Writing and 11th-grade students at the STEM School.

Each Wright State student was paired with at least two high school students. The students communicated exclusively via email, sharing copies of the resumes, cover letters and feedback on their partners’ materials.

At the conclusion of the project, each student created a portfolio with resumes, cover letters and email correspondence with their partners.

Wright State students produced materials they could use after graduating. The high school students researched possible careers they might want to pursue after graduating from college, then produced profiles for those positions. They were responsible for writing a resume and cover letter for both a job and an internship. They also conducted simulated job interviews with their classmates.

The collaboration was the idea of Jade McDaniel, who teaches Technical Reading and Writing and Language Arts at the STEM School. McDaniel, who received an M.A. in English literature and a certificate in women’s studies at Wright State in 2012, approached Lars Söderlund, Ph.D., assistant professor in the department of English Language and Literatures, about the project.

McDaniel said collaborating with Wright State students made the project more authentic for her students and helped develop their writing skills.

Teachers at the STEM School, McDaniel said, are encouraged to work with people in the community. “Our students are used to talking to adults and getting feedback from partners outside of school,” she said.

Amanda Gray, a student at the STEM School said her favorite part of the project was working with a Wright State student. “It took me out of my classroom and put me into the world,” she said. “I say this because we got to talk to other students who are older than us about an issue we might run into later in life, and it really helped out a lot.”

Another high school student, Bhartah Ramini, said it was helpful to analyze his skills and weaknesses professionally and create a document that expressed his experience. “I think this skill will be very helpful in the future when I am making an application of any kind,” he said.

Both Söderlund and McDaniel said the project helped them demonstrate to their students the important role email plays as a professional communication tool. Söderlund said he encouraged his students to write emails in a professional manner and see how productive they can be by using email.

It can be difficult to write resumes in a professional manner, Söderlund said. “Because technical writing requires a certain self-consciousness, students are able to see their work in a new light by working with high school students,” he said.

“The most interesting aspect of working with these younger students is learning about their goals for the future and encouraging them to continue working towards their dreams,” said Emily Kretzer, a graduate English student. “I am inspired by their determination and the hard work they put in at such a young age.”