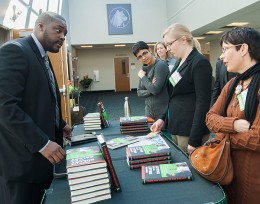 Nearly 50 years have passed since Title VII, which bans employment discrimination based on race, color, religion, national origin and sex, was enacted into law. Although the tides of social change continue to strengthen equality and justice, much remains to be done.

That was the subject of Wright State University’s Race, Class, Gender and Sexuality Symposium on Feb. 21.

During panel discussions and workshops, dialogues were held among faculty, staff, students and community members about race in the GBLTQ community, the construction of black identities, stigmas about reproductive rights, feminism in media and identity in visual arts.

“Any time you have a symposium looking at these essential dimensions of identity, you have an opportunity to help people understand how those various groups are constructed,” said Kimberly Barrett, Ph.D., vice president for multicultural affairs and community engagement at Wright State.

“In doing that, you give people the opportunity to make positive changes in terms of issues with social justice, inclusion and equality,” she said. “This type of symposium gives people the chance to understand themselves and those around them a little better.”

The symposium’s keynote lecture was delivered by Jakobi Williams, Ph.D., associate professor of African American and African diaspora studies and history at Indiana University. It was titled “From Fred Hampton to Barack Obama: Race, Class, Gender and the Illinois Chapter of the Black Panther Party (BPP).”

Williams examined Chicago’s Rainbow Coalition, a group of seemingly disparate political groups active in the late 1960s and early ’70s that included the Black Panther Party, the Young Lords, Rise Up Angry, and the Young Patriots Organization. The Rainbow Coalition mobilized across racial and ethnic groups in order to address class issues, strengthen their communities, and provide needed social programs such as free breakfast and lunch programs in schools and free health clinics.

“Understanding yourself and getting insights about your own identity and life experiences is often what motivates people to then make changes in the community,” said Barrett. “People that try to make a difference in the world without first understanding themselves will not be effective community leaders.”