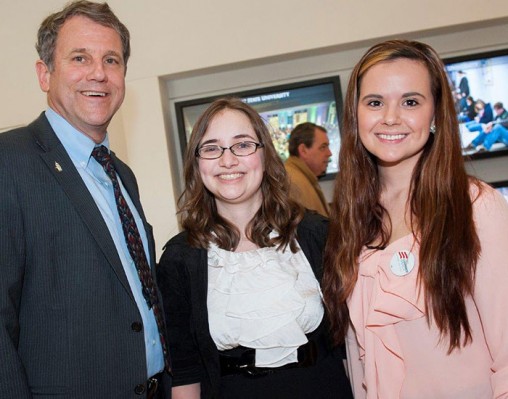 A project by Wright State University social work students to encourage and help fellow students sign up for health insurance drew a U.S. senator and the president of Enroll America to campus.

U.S. Senator Sherrod Brown (D-Ohio) joined student organizers and others at a news conference in the Student Union on March 18 to praise and publicize the project, designed to get students and others to sign up for coverage under the Affordable Care Act before the March 31 deadline.

“Part of what ignited our passion is that so many of us have seen and experienced not having health insurance. We’ve seen it in our clients, we’ve seen it in the other students,” said Sasha Cahill, a senior social work student who helped organize the event. “It means not having a safety net and ending up in debt.”

The two dozen students in Social Work 484 opted to do health care enrollment as their spring project. They went to an Enroll America training session and worked with Wright State Boonshoft School of Medicine’s Center for Healthy Communities, a community-academic partnership committed to improving the health and well-being of the community.

On March 18, the social work students set up tables outside the Hangar to interface with students, giving them information and directing them to certified health coverage enrollers.

“This has been an incredible learning opportunity,” said Cahill. “We are really excited and happy to see that we’re making a difference, that this is real, that this is important.”

Brown said getting the message out on college campuses is key because students are among those least likely to know about the enrollment opportunity. 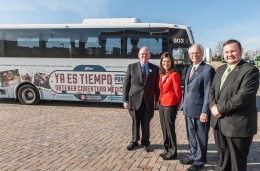 Enroll America, a nonprofit organization dedicated to maximizing the number of Americans who enroll in health coverage, made Wright State a stop on its bus tour.

“I’m especially thrilled to join the team here in Dayton to see first hand something that I’ve been hearing a lot about, which is the work folks are doing on the ground here in this community,” said Anne Filipic, president of Enroll America and daughter of Matt Filipic, visiting Wright State professor and the university’s former senior vice president for business and fiscal affairs.

Anne Filipic said one of every four Americans under the age of 35 is uninsured, the highest rate of any age group.

“That’s why partnerships with Wright State and other universities are so important,” she said.

Kellie Jean Roberts, a social work student who helped organize the event, said she had been uninsured when she went to the hospital in February for medical tests that would have cost her thousands of dollars. She was able to sign up for health insurance under the Affordable Care Act thanks to an enroller at the hospital.

“I just want to reach out to other people and say, ‘Get covered,’” Roberts said. “You don’t want to get that medical bill. You don’t want to put your parents in that situation that they can’t afford. When you’re in college, things happen.”