The replica 1903 Wright Flyer hanging in Wright State’s Dunbar Library landed for a tune-up this week.

After soaring 16 feet above the library’s atrium since September 2001, the flyer was brought back to earth June 9. It will remain on the second floor of the library all week while it is inspected for structural stability and cleaned.

“People are welcome to come out and see what we’re doing,” said Dawne Dewey, head of special collections and archives and director of the Public History program at Wright State. 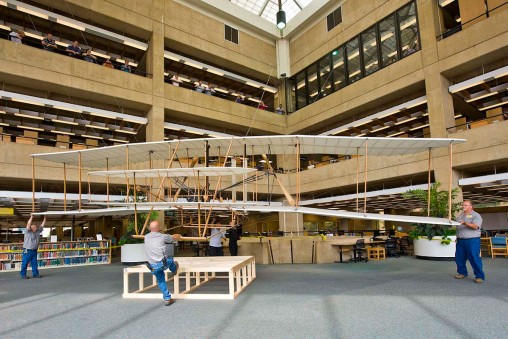 After soaring in the Dunbar Library September 2001, the replica 1903 Flyer returned to earth for cleaning.

Volunteers are using a special vacuum designed for cleaning artifacts and applying a special wax to the metal and wood on the biplane.

Public History graduate students and alumni are assisting with the cleaning. The weeklong project provides a learning opportunity for those students who are studying archiving and museum management. Mary Oliver, director of collections at Dayton History and an adjunct faculty member in the Public History program, provided expert instructions on properly cleaning the plane.

The project involves the Dunbar Library’s Special Collections and Archives, the carpentry shop and the Office of Facilities Planning and Development.

The biplane is a full-size replica of the Wright brothers’ 1903 Flyer, the first machine to achieve controlled powered flight. It has a wingspan of more than 40 feet, is 21 feet long from nose to the tip of the tail and weighs almost 500 pounds. 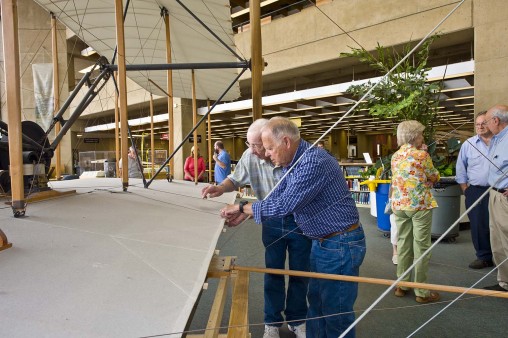 Jerry Beech, left, and Jay Phipps, who were among the original volunteers who built the flyer, inspecting the biplane after it was lowered Monday.

The flyer was built by a group of volunteers of skilled woodworkers, machinists and seamstresses led by HowardDuFour, an engineer and master machinist who worked in the Instrument Shop in the College of Engineering and Computer Science.

DuFour spent over a decade making the dream of building the flyer a reality, and it took nearly two years and thousands of hours to construct the plane.

Since no original drawings of the plane existed, DuFour used finished dimensions from the National Air and Space Museum, which had measured the actual 1903 Flyer displayed in its collection. DuFour and his team matched the materials and methods used by the Wright brothers as closely as possible.

“It was built to be just like the original flyer,” Dewey said. “Howard always said if it had a real engine and we tried to fly it, it would fly.”

A number of the volunteers who helped build the flyer were on hand when the plane was lowered June 9.

Wright State is named in honor of Wilbur and Orville Wright. Special Collections and Archives houses the largest collection of Wright brothers materials in the world.

Dewey said the plane is an “inspiration and represents what Wright State is all about.”

“Having that plane in the atrium I think represents the innovative spirit of the Wright brothers and the university,” Dewey said. “It’s a part of our logo. It’s a symbol and hopefully an inspiration for all the students who study underneath it.”

Learn more about the flyer

More information on the Wright Flyer project is available on the Special Collections and Archives website.

“A Dream Fulfilled: The Replica of the 1903 Wright Flyer at Wright State University,” which documents the construction project, is available on Wright State’s CORE Scholar repository.