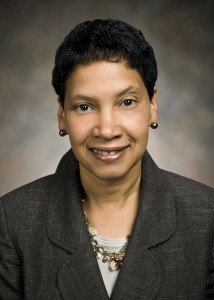 Janeece Warfield, Psy.D., is well-known for having transformed the community in so many ways. For almost two decades, her partnerships with community organizations have not only enhanced the learning opportunities of Wright State students, but they have also left a significant impact that won’t soon be forgotten.

Warfield graduated from the School of Professional Psychology (SOPP) in 1987 and was invited to become affiliate faculty in 1994. In 2000, she became a core faculty member in SOPP. Since then, Warfield has built her career around community engagement activities. Her specialization has always been children and adolescents.

Along with several colleagues, Warfield coordinated the Positive Action Choices Training program and, in 2000, she co-developed the Parents Early Childhood Education-Positive Action Choices Training program—a violence prevention program that targets preschoolers. A universal-based psychoeducation program, with both classroom and parental components, it teaches empathy, anger management, and impulse control to children and positive discipline practices to parents and teachers.

Wright State has also benefited from Warfield’s community engagement. From 2002 to 2010, the Department of Education funded the Promoting Positive Relationships and Partnerships Program, a collaboration between Warfield and the Mini-University Child Development Center. The partnership facilitated the relationship between parents and teachers to enhance relationships with children. Warfield was the primary investigator on this project, which received more than $500,000 in funding.