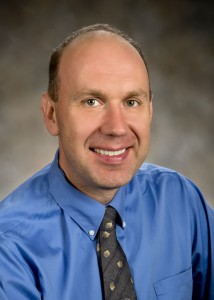 Since joining the Department of Physics in 2010, Ivan Medvedev, Ph.D., has established a highly active and externally funded research program focused on biomedical applications of terahertz spectroscopy.

The assistant professor of physic recently received a three-year award from Samsung to investigate the capabilities of this technology in accessing blood glucose levels based on concentrations of chemicals present in expired breath. The technology will enable the development of future generations of compact terahertz analytical chemical instrumentation, which will impact applications in medical, environmental, occupational chemical detection, and intelligence fields.

Over the course of his time at Wright State, Medvedev has garnered more than $600,000 in external funding, with a broad portfolio including both government and industrial services.

“Ivan is very productive and has an amazing career record,” said Yi Li, dean of the College of Science and Mathematics. “What makes him stand out is his strong desire to combine theoretical study with real-world applications.”

Medvedev’s research is strongly integrated with his keen teaching and mentoring abilities at both the graduate and undergraduate level, and a number of his students have received awards and have made national presentations.

Throughout his career at Wright State, he has actively adapted new pedagogy to teaching in his large physics courses. He has consistently received favorable student and peer evaluations in his annual faculty development reports, chair’s annual evaluations, student comments and statistical summary of teaching evaluations.