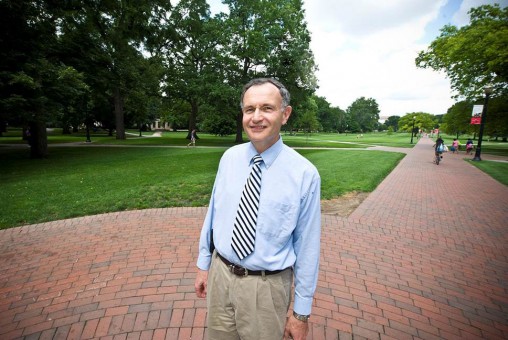 Wright State grad Barry Brownstein chronicles his decision to return to college and change careers at age 58 in a new book “Old Man on Campus.”

It was time for him to leave home for college. Barry Brownstein’s car is stuffed with books, jeans, dishes, computer gear and a stereo.

As he pulls into traffic, the voice in his head is a full-throated symphony.

“Was I crazy to quit my job? Do I really have enough functioning brain cells left to complete a master’s-level physician assistant program with students less than half my age? And how did I end up even wanting to do this now — at 58?”

Today, Brownstein — a Wright State University graduate who enjoyed successful careers as an aerospace engineer, computer systems designer and management consultant — is very much a physician assistant, working for a Columbus cardiologist.

And at age 68, he still goes on overnight runs with emergency squads, bringing his skills to shootings, stabbings, grisly car accidents and other traumatic interruptions to life.

Brownstein has chronicled his experience in a book, “Old Man on Campus.” He wrote it two years after graduating, using diary-like material from his emails and even daily historical reports from the National Weather Service.

Brownstein’s unusual career path started out in a conventional way.

He grew up in Rome, N.Y., the son of an Air Force father who worked on aircraft at Griffiss Air Force Base. Brownstein remembers seeing white trucks driving through town carrying alert crews from the Strategic Air Command, tasked with being airborne at a moment’s notice for nuclear bombing runs over the former Soviet Union.

“How am I going to do anything that’s nearly as worthy as the things all these people do?” Brownstein remembers thinking. “So I had ambition. By the time I was in junior high, I knew I was going to be an aerospace engineer.” 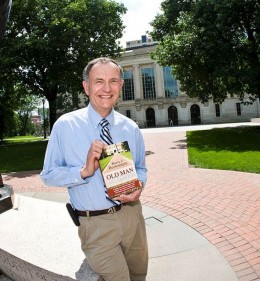 Barry Brownstein enjoyed careers as an aerospace engineer, computer systems designer and management consultant and now works for a Columbus cardiologist and volunteers with the Madison County EMS.

After high school, Brownstein attended the University of Maryland and then the University of Michigan, obtaining his bachelor’s and master’s degrees in aerospace engineering. In 1969, he was called to active duty by the Air Force and moved to Dayton, where he was stationed at Wright-Patterson Air Force Base. His wife, Linda, got a job at Wright State in the Office of Communications.

When Brownstein got out of the Air Force, he stayed at Wright-Patterson as a civilian, working on jet engine design and testing. From 1973 to ’77, he attended Wright State and got his master’s degree in computer science.

“The faculty at Wright State treated older students with more respect,” he recalled. “It was a great place to go as an evening student. We had jobs. They were interested in what we were doing and how it might apply to what they were teaching. I had a really great time there.”

Brownstein then got a job in Columbus with Battelle in the company’s computer department and later left to start his own project management consulting company.

One day, in August 1984, he and his wife were out for a drive, stopped for a tour of the new St. Ann’s Hospital and on a whim he signed up to be a volunteer. He found himself assigned to the emergency room, his worst nightmare.

Brownstein had been squeamish as a kid — didn’t like blood or hospitals. He once chopped his foot with an axe, stepped on his own track shoes and had infections that required hospital stays and IV antibiotics.

But something happened to Brownstein in volunteering for the emergency room — he liked it. Then he took classes to become a paramedic and became one.

Thus began a new series of adventures — from trying to save the life of a young man with a bullet in his chest while a policewoman pointing a shotgun held off a hostile crowd to rescuing a man who was reported “trapped” when the sofa bed he was moving pinned him to the wall.

Still, something was missing.

“I went through this period of time where I really didn’t know what I wanted to do,” he said. “I was a little off course.”

One day, he called a friend who was working as a physician assistant in Zanesville and spent a day job-shadowing him.

“I decided this is cool,” Brownstein said. “It was science and it was people. I really liked the combination.”

So in 2004, he turned his consulting business over to his son and began physician assistant school at Marietta College, a rigorous 27-month program.

“I discovered that my mind still worked; because you start to wonder. You get into your late 50s and say, ‘Can I really do this?’” he said. “The technology is all different, and they know stuff now they couldn’t teach us 50 years ago. But the rapid ability to grow close with people in a common situation was very rewarding.”

The toughest part for Brownstein was memorizing the seemingly countless parts of the human anatomy.

“Up until the last exam, I was convinced I was a gnat’s eyebrow away from flunking out,” he said.

Brownstein graduated in 2006. He didn’t plan to write a book about his experience at the time, but later decided he wanted to share it.

“What’s it like to walk off the plank and just be in this dream?” he said. “I felt like it was going to be one of those life experiences that was going to shape your whole life. I decided I would recreate it and write it in the present tense.”

His degree has given Brownstein a whole new career and a booster shot of self worth, tending to cardiology patients.

“Every day — several times a day — you know exactly why you’re there,” he said. “You’re in this spot where you’re the only person who is in a position to help. And that is really cool.”

Brownstein said going back to college at 58 taught him that people need to be creative and a little bit fearless if they are dissatisfied with their current life situations.

“If you’re unhappy, you’ve got to push things away and make at least a little space for something new,” he said. “If it makes you feel good, take another step. Don’t sit still and get slaughtered in the trenches. I think it’s not letting the enthusiasm get beat out of you.”

In addition to working four 12-hour days a week at the cardiology office, Brownstein rides with the Madison County EMS out of London, Ohio, two Fridays a month — from 7 p.m. to 7 a.m.

“I just renewed my paramedic license for another three years,” Brownstein said with a smile. “As long as I’m carrying people into the truck instead of them carrying me, I guess I’m OK.”