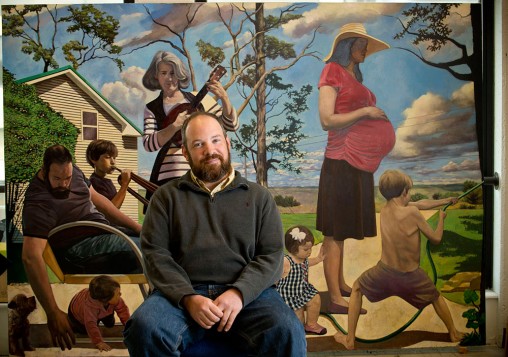 Assistant art professor Jeremy Long painted in Chicago and Rome and taught in Illinois and New York before joining the Wright State faculty in 2012.

Dabs of pastel paint rest on a palette next to their crumpled tubes. A tufted forest of brushes flares out from the tops of mason jars. Stacks of rust-colored, paint-splotched rags pancake on the floor.

It’s the studio/office of assistant art professor Jeremy Long, who made his way to Wright State University and its Creative Arts Center after a tumultuous journey through the art world from Chicago to Rome.

“They really are invested in the creative arts here,” said Long, who joined the faculty in 2012. “Wright State enables me to share my skills and experience with the students while indulging in my painting habit.”

As a young child, Long experimented with drawing and painting and discovered he was better than most. It soon became a defining characteristic of his personality.

His mother, a corporate paralegal, worked hard to send Long to Chicago Academy for the Arts, a nontraditional high school populated by creative types who dressed in punk and Goth fashions and were accepting of each other.

“I was fairly conservative in how I looked and dressed, but my peers were sort of outrageous,” Long recalled. “It was a very, very interesting place. The whole thing was put together almost like an experiment.”

After graduating, he received a scholarship to the highly regarded Kansas City Art Institute and in 1995 obtained his bachelor’s degree in fine arts with a concentration in painting.

Returning to Chicago, Long and several other painters moved into an apartment in a historic Gold Coast neighborhood building that is now the luxury Hotel Sofitel. He got a job down the street at a specialty store as a wine and cheese consultant, an expertise he developed in Kansas City.

“I would work there and come home and paint and have lots of friends over and talk about painting,” he recalled. “It was an exciting time.” 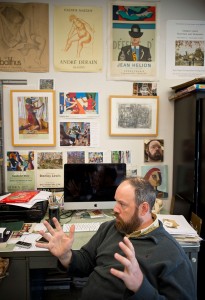 As a member of the Department of Art and Art History, Jeremy Long focuses on teaching painting and working on his own art.

Long and his friends rented a gallery on the first floor of their apartment building and filled it their paintings and those of their far-flung colleagues.

“Every other day we would get this shipment of paintings in crates coming from Paris and other places in the U.S.,” he said. “We were so excited about making paintings and having these shows that we curated. We got a fair amount of attention.”

In 1997, a man who came to a show liked Long’s work and offered him and a fellow painter the use of his apartment in Rome’s Piazza Barberini and his villa in the hill town of Calcata north of Rome.

Calcata has a thriving artistic community described in The New York Times as what “may be the grooviest village in Italy, home to a wacky community of about 100 artists, bohemians, aging hippies and New Age types.”

Long enjoyed the picturesque Calcata, but spent most of his time in Rome.

“The whole place was a giant painting,” he said. “I spent a long period of time on one big landscape painting, painting outside in plain air. That was in the Villa Borghese overlooking Piazza del Popolo.”

Long returned to Chicago in 1998 and made ends meet by painting murals for bars and restaurants. Then he enrolled in a summer arts program at Chautauqua, a historic artist community in western New York state where he met his future wife, Colleen.

The couple went on to graduate school at American University in Washington, D.C., where Long got his master’s degree in fine arts with a concentration in painting.

There was a whirlwind of teaching jobs for Long over the next few years — at the Chicago Academy for the Arts, Knox College in Galesburg, Ill., the American Academy of Art in Chicago and Ithaca College in New York.

Then Long learned of a faculty opening at Wright State and applied for it.

“I knew what kind of program they ran here,” Long said. “It’s centered on observational drawing and painting, working from life, really trying to understand structure that is in painting. And also looking really closely at art of the past — the masters.”

Long teaches painting and drawing to undergraduates, who are hoping to become professional artists. He tries to give them the building blocks that will help unlock their talent.

Before Long himself starts a painting, he organizes it in his mind, breaking it down and trying to visualize its connective tissue — the angles, alignments, shapes, spaces and shadows.

“There are all of these things that are worked out that allow me to begin to paint the big painting without feeling completely lost or overwhelmed,” he said. “Painting and drawing is a rigorous activity.”

In the age of the Internet and short attention spans, Long tries to persuade his students to take the time to really absorb their art — just staring at the canvas for long stretches — so they reach a deeper understanding of what they are trying to express.

“If they trust you, after awhile they are pretty amazed at what they can do,” Long said. “So there is a lot of reward as a professor.”