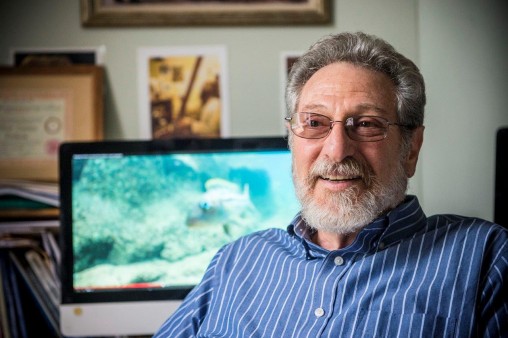 Gaines has shot underwater footage in Tanzania’s Lake Tanganyika and videotaped aquatic life and researchers on California’s Eel River and at the Duke University Biological Field Station. And his video production class for graduate science students from the College of Science and Mathematics has given them the tools to produce videos about butterflies and other wildlife.

Gaines, Ph.D., is working to equip science students with the skills to effectively communicate science to public audiences.

In last spring’s video production class, one student was able to capture on videotape a butterfly hatching from a cocoon. Another student created a video for a campaign that helped fund algae research and purchase a microscope. 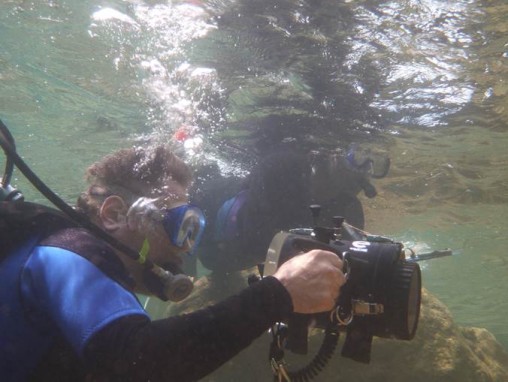 “It’s a waiting game,” Gaines said. “You have to be in the right place at the right time.”

Gaines learned that first hand during his trip to Lake Tanganyika in July and August 2011. In some cases, he would scuba dive to the bottom of the lake, leave the camera running and swim away.

“We got some of our best footage that way,” he said.

Gaines, a certified scuba diver, received a grant from the National Science Foundation to document research into the relationship between fish and algae in the lake by Yvonne Vadeboncoeur, Ph.D., an associate professor in Wright State’s Department of Biological Sciences who specializes in aquatic ecology. An undergraduate biology major from Wright State and several graduate students were also on the trip, which included brushes with water cobras and electric fishes.

“I was watching researchers from our team who were setting up experiments,” Gaines said. “It was my job to try to tell that story.”

A highlight of the trip occurred when the team met with Jane Goodall, considered the world’s foremost expert on chimpanzees. She is best known for her 45-year study of social and family interactions of wild chimpanzees in Tanzania’s Gombe Stream National Park. 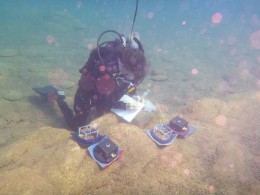 Elliot Gaines received a grant from the National Science Foundation to document research on Lake Tanganyika in Tanzania by Yvonne Vadeboncoeur, associate professor of biological sciences.

This past summer he used the videocamera to help conduct a field research project on the Eel River with the University of California-Berkeley about algae and its effect on salmon and steelhead trout.

“The Eel River is very shallow, so I would get close and follow the fish through the surface of the water,” he said.

Gaines also teaches Performance for the Media in the College of Liberal Arts, a course in which students learn to work as broadcast journalists. He said many students interested in videography focus on sports and fail to appreciate the wide range of career possibilities.

Gaines is president of the Semiotic Society of America, an international scholarly organization that focuses on semiotics, the study of signs and sign-systems. He will be the keynote speaker at the organization’s annual meeting in Seattle in October.

Gaines said there is a need for communication specialists who can teach people to focus on how to understand messages, something he drills into his students.

“Who’s the messenger? Why is this message coming out? What’s the impact?” he said. “A communication degree is not just to get a job. It’s to support the notion that citizens in a democracy have to understand how profoundly affected we are by media.”