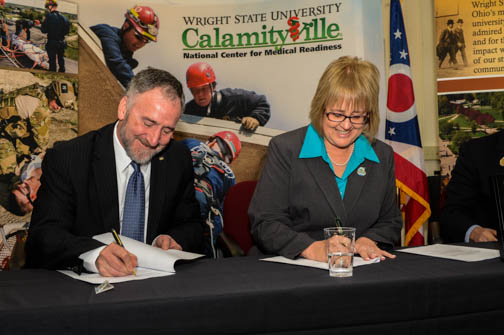 Ownership of Calamityville, home to the National Center for Medical Readiness (NCMR), was officially turned over to Wright State University as further expansion of Calamityville’s mission picks up speed.

The land transfer occurred during a Nov. 3 signing ceremony held at the site with officials from Wright State and the City of Fairborn, the previous owner. Signing the deed transfer was Fairborn City Manager Debbie McDonnell and Robert Fyffe, Wright State’s vice president for research and graduate studies.

“It’s a culmination of many years of effort,” said Fyffe. “There are buildings, there is land, but it’s going to be all about the people.”

NCMR Director Rufus Smith, a retired brigadier general with the Ohio Army National Guard, said the center will continue to have a “strong partnership” with Fairborn.

An emotional McDonnell said making Calamityville a reality and bringing it to where it is today took a lot of hard work by a lot of people.

“This is something that had never been done before. It was risky in a lot of ways,” she said. “This is going to be an enormous opportunity for all of us.”

The land transfer comes at a time when the center – which has more than 20 partners – is expanding its mission beyond medical readiness to focus on individual and community-wide readiness, response and recovery from emergencies and disasters. 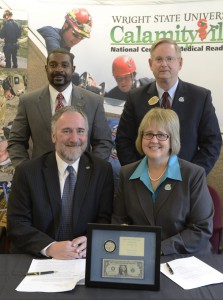 Calamityville is a 54-acre disaster training zone with concrete passageway-filled buildings, silos, tunnels, ponds, cliffs and wooded areas. It was designed to prepare the civilian and military communities to work with traditional disaster responders and provide the nation with a more complete approach to finding victims, offering initial care and safely evacuating them from disaster-related environments.

“We have some of the best subject-matter experts in the country training here,” Smith said.

Calamityville will soon launch online and on-site training for health-care teams on behalf of the National Disaster Health Consortium in partnership with the College of Nursing and Health. Another emerging business area is potential training for unmanned aerial systems by the Wright State Research Institute and Sinclair Community College.

Over the past few years, Calamityville has played host to training exercises involving Air Force pararescuemen, pathologists, forensic anthropologists, funeral directors, criminal-justice students and even search dogs and their handlers.

The site has also combined training with virtual reality, was the focus of a visit by U.S. Congressman Mike Turner and has hosted several 9/11 Memorial ceremonies.

“A lot of sweat went into this,” said Kirkpatrick. “We are thrilled to be part of Wright State University.”