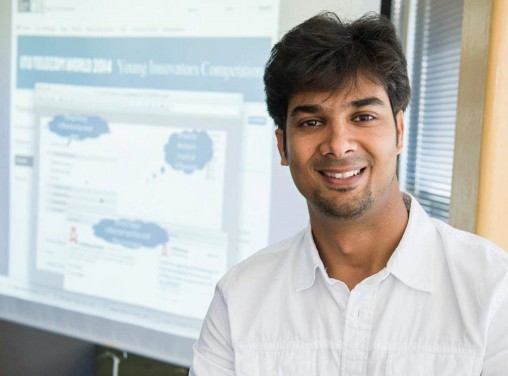 As a young boy growing up in India, Hemant Purohit marveled at how his father would do his accounting work using only a pencil and paper. But when Purohit was introduced to computers in the sixth grade, he saw the future.

Today, Purohit is a graduate researcher and computational social scientist at the Ohio Center of Excellence in Knowledge-enabled Computing (Kno.e.sis) at Wright State University. Along the way he used his mastery of computing with insights from social science to harness the power of massive data from social media.

Focusing beyond interdisciplinary computing research as his profession, Purohit wondered how to make a real impact on society by transforming research and development from an academic lab to the real world. This passion led him to volunteer for and coordinate digital humanitarian responses during major disasters worldwide, including the Uttarakhand floods in India, the Phailin cyclone and Typhoon Yolanda.

During the recent floods in the Jammu and Kashmir regions, Purohit and a team of coordinators also guided digital volunteers using a tool developed at Kno.e.sis to disseminate prioritized relief needs as well as identify actionable rescue requests and redirect to the military’s rescue-monitoring team, helping to save lives. Such technology-assisted response efforts, supported by the Kno.e.sis SOCS team, have been covered by the Hindustan Times, The Hindu and other media outlets.

With support from the National Science Foundation, Purohit and his interdisciplinary (computer science and psychology), team led by Wright State professor Amit Sheth, the LexisNexis Ohio Eminent Scholar at Kno.e.sis, are designing social media technology that will identify key situational awareness information and prioritize for decision-makers in disaster relief.

Purohit’s SoMeC technology was one of two winners selected by the committee. A few months earlier, Purohit was also selected as one of eight international fellows for the International Conference of Crisis Mappers, an influential humanitarian technology event hosted by the United Nations in Nairobi, Kenya.

SoMeC is a web mobile application that automatically finds important people and organizations to engage on social media in near-real time to improve situational awareness, timely spreading of prioritized needs such as medical supplies and public engagement of disaster response organizations.

With the growing adoption of mobile, Internet and social network platforms, the app is designed to help response organizations better connect and coordinate with citizens for relief management, rescue redirections and countering rumors. Purohit also plans to use the technology on development issues.

Purohit grew up in Udaipur, India, and obtained his undergraduate degree in communication and computer engineering, studying mobile, digital and analog communication at LNMIIT India.

In 2007, Purohit ran across a research paper written by Sheth and his team at Kno.e.sis. An exchange of emails between the two led to an undergraduate research internship at Kno.e.sis for Purohit, who is now working on his Ph.D. in computer science and engineering under Sheth.

Sheth says the students who arrive at Kno.e.sis as undergraduates from a relatively narrow and focused technical education turn into people able to see and tackle complex, challenging, real-world problems where technology plays a role.

By leveraging his skills in computational social science, Purohit has decided to try to help curb another important social problem — gender-based violence. His goal is to design data-driven policy intervention in collaboration with experts of the U.N. Population Fund.