Moving Forward by Looking Back

There’s a manuscript in Tom Webb’s office that should be in a museum. Not because it’s antiquated, but because it was so progressive at the time of its publication in 1977 that it is still critically relevant today.

Disabled Students on American Campuses: Services & State of the Art was edited in part by Pat Marx, the first director of the Office of Disability Services at Wright State. She and her colleagues organized and hosted the first higher education conference on serving students with disabilities. About 12 schools collaborated nationally to organize this initial conference. Wright State was the only school from Ohio.

The conference has become known as the first meeting of AHEAD—the Association of Higher Education And Disability. Wright State has been ahead of the class and squarely at the forefront of disability services in higher education ever since.

“There is no place like Wright State. We’re about inclusion and not exclusion and that will always set us apart for people with all sorts of backgrounds and abilities,” said Dan Darkow, a senior majoring in information systems who was born with spinal muscular atrophy type 2 (SMA2). 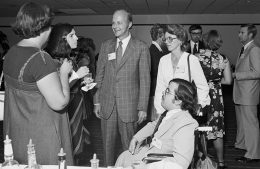 In 1970, Wright State was one of the first schools to create an Office of Disability Services. That was three years before Section 504 of the Rehabilitation Act required any university receiving federal money to make its programs accessible to persons with disabilities and 20 years before the Americans with Disabilities Act. Marx’s leadership during that era was undeniable. She designed and implemented much of what the office still does today.

“It was all she thought about, trying to get the program up and going,” said her husband, Barry Garlitz at the time of her death in 2011. “They needed somebody to pile-drive the ideas, and she was a great fit. She had a real stick-to-it-ive-ness, a real ability to override resistance.”

Today, Wright State’s campus is one of the most accessible in the country. Its tunnel system is believed to be one of the most extensive collegiate pedestrian tunnel systems in the United States. Nearly two miles of tunnels (10,436 feet) snake their way beneath the Dayton Campus linking 20 of 22 buildings in the academic sector of campus. It is an invaluable resource for students with physical disabilities.

“The number one thing that I noticed when I was touring colleges in high school was the overall accessibility of this campus and how enabling it was for students with disabilities to be independent throughout their day,” said Darkow.

Through Marx’s pursuit of making the campus environment truly accessible, she learned a greater truth and found a noble cause. 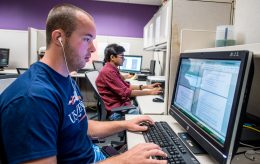 At any give time 10 to15 student workers can be found on the clock in the Technology Center. Workers perform a variety of tasks like scanning textbooks, editing digital PDFs, converting text into audio files, and producing books in Braille.

“She had a vision to serve students with disabilities, and she felt like they were being underserved and simply lost in higher education,” said Webb, current director of the Office of Disability Services.  “She recognized that before a lot of people even had a clue.”

It didn’t take long before Marx created the Personal Assistance program so students with severe physical disabilities could get the in-home (before Wright State had residence halls) and on-campus support they needed. Students use PA (personal assistance) services morning and night to help them in their daily lives on campus. Wright State is one of the few universities that still offers it as an in-house service. Most universities shy away because of legal liability and high costs.

“The PA station here at Wright State is unlike any other college. They always have someone available during the day for us. Having that flexibility and not being tied to a certain schedule is priceless,” said Darkow, who plans to pursue a career serving students with disabilities after he graduates.

Wright State blazed a trail with alternate format production too. Since the ’70s, the university has been committing immeasurable resources to converting textbooks into alternate formats for students with disabilities. It started with hiring students to read textbooks aloud and record them on 60-minute cassette tapes. It has evolved into a production of remarkable proportion.

Disability Services is now one of the largest student employers on campus with well over 150 student workers. In the Technology Center, textbooks and other course materials are converted to MP3s, PDFs that are tagged for accessibility, and even Braille. The average textbook takes 40 to 50 hours to convert. A textbook from a STEM discipline will take over 100 hours. Katherine Myers, assistive technology specialist, manages the production. “We definitely do more than any other university that I’m aware. We are at the top 1 percent in this area,” said Myers.

In 2014, Disability Services looks a lot different than it did in the ’70s or even the ’80s. With 11 full-time staff and two more on the way in November, the office and its services have changed and grown with the needs of students. 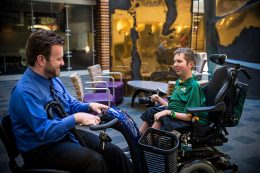 First created to serve students with physical disabilities, ODS has now also proven to be a leader in serving students with Asperger’s and high-functioning students on the autism spectrum. Wright State currently serves about 120 of these students, about 30 of whom benefit each semester from a pilot program that’s already making a profound difference in their lives.

Raiders on the Autism Spectrum Excelling (RASE) pairs students with a transition coach who meets with them for up to 10 hours a week. Usually a peer as well as a student, the coach helps model appropriate social interaction.

Typically college students on the autism spectrum are highly intelligent and very successful in the classroom but can struggle with social interaction and social cues like knowing when it’s appropriate to talk or wait their turn.

“They role-play, they talk through situations with them on how they can handle things in the classroom and outside of it,” said Webb. “It’s often simple stuff, like how to meet with your professor before the semester to let them know about your disability.”

A recent peer-reviewed research article based on the results of Wright State’s RASE program shows significant positive outcomes for retention and GPA with these students.

“Most university ODS offices do not have somebody who is working with the student day-in and day-out like this. They don’t have the resources,” said Webb. “Our program goes above and beyond.” 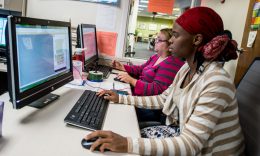 Wright State is also excelling at serving students with learning disabilities as well as those who struggle with attention deficit hyperactivity disorder, anxiety, depression, bipolar disorder, and schizophrenia.

Wright State’s strength with learning disabilities is rooted in how often counselors meet with students to solve problems and troubleshoot those that may be on the horizon. In a safe and familiar space, students talk through challenges.

These students are also the greatest benefactors of the alternate textbook production. About 70 percent of students who use the “alt” materials have a learning disability. It helps for them to absorb academic material in nontraditional formats.

The greatest resource for these students, however, may be the ease with which they can take individually proctored exams. More than 4,000 exams were proctored on behalf of professors in the office last academic year. Students take the test in a reserved space to reduce distractions and are often given more time because of their disability.

It’s proof, Webb said, of a culture of inclusion that touches both faculty, staff, and students with equal strength.

The office’s efforts are getting noticed off campus too. Last spring, Katherine Myers, the ODS adaptive technology specialist, testified before the U.S. Senate’s Health, Education, Labor, and Pensions Committee. Iowa Senator and committee chair Tom Harkin was impressed with Myers’ testimony and “awestruck by our services,” Webb said.

While there is so much going right, Webb believes there is much that can be better. As the new director of disability services, he appreciates Wright State’s history, but has a vision for its future.

One growth area on which Webb plans to focus is the quality-of-life component for students with disabilities, which is increasingly becoming a formidable factor in enrollment. According to Webb, the programs outside the classroom, like adaptive recreation and social opportunities, still need a boost.

“We’ve had a phenomenal run at being a leader in disability, but we are on the verge of losing that foothold,” said Webb. “What appealed to me coming here was the chance to put our feet back firmly on top. To reboot.”

Webb also plans to strengthen the office’s relationship with faculty to raise awareness about its services and share best practices in accessibility with course design. So much of course design hinges on the digital front in the form of PDFs, Word documents, and web pages. There are features that can be built into each of these tools that can eliminate hurdles for many students with disabilities.

“There is so much potential here that most universities could never tap into because they don’t have the culture that we do,” said Webb. “We need to continue to innovate beyond what we’ve been doing traditionally. We’re already on the right track, but this office, this university historically has laid the tracks for others. We must keep pushing to do that.”