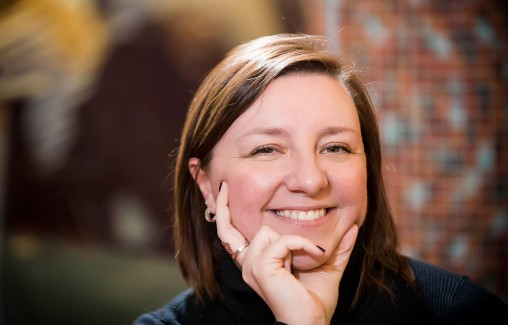 Karen Hamby, who earned an M.S. degree in logistics and supply chain management from Wright State, is team leader in the C-5 acquisition program office at Wright-Patterson Air Force Base, overseeing modifications to the planes so they remain airborne, viable and safe.

Karen Hamby may not be a pilot, but she is responsible for keeping a fleet of Air Force cargo planes flying.

A team leader in the C-5 acquisition program office at Wright-Patterson Air Force Base, Hamby and her coworkers are responsible for overseeing modifications to the planes so they remain airborne, viable and safe.

“Our job is to make sure that aircraft is still useful for them based on the requirements the Air Force gives us,” she said. “I want to give them what they’re asking us for and want them to feel confident that what we’re doing for them is exactly what they want.”

Hamby’s office also works closely with defense contractors, who often make the modifications requested by the Air Force. The office’s responsibilities include executing and monitoring contracts and overseeing the distribution of government funds.

Since it was introduced in 1969, the C-5 has been used to support U.S. military operations in all major conflicts, distribute humanitarian aid and disaster relief and support NASA’s Space Shuttle program.

Because of the age of the aircrafts, the government is modifying and retiring many C-5s. The Air Force plans to reduce the size of the C-5M fleet to 52, Hamby said.

Hamby graduated with an M.S. degree in logistics and supply chain management from Wright State last fall. She also received an outstanding student award from the faculty.

She said the program gave her a solid foundation in both logistics and supply chain management and helped her better understand manufacturing processes.

“This program was a really good experience for me,” she said.

Hamby enjoys the fast-pace nature of her office and the opportunities her work offers to think creatively and devise solutions that meet regulations and requirements, are legal and within budget.

“In your job I think it’s extremely important that you’re open minded,” she said.

She also takes pride in supporting the Air Force’s mission.