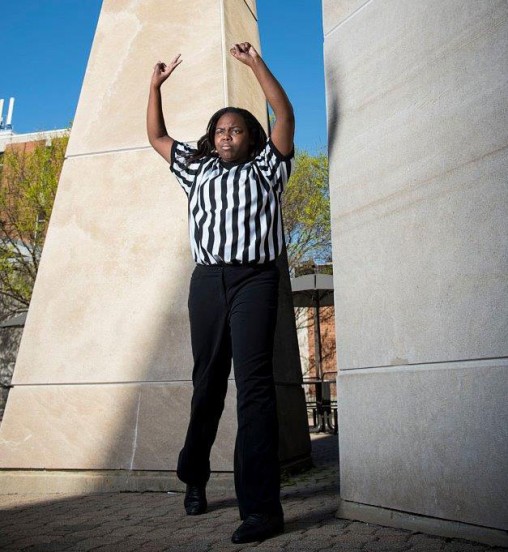 Introverted and soft-spoken, Anitra Jordan found a way to break out of her shell in a big way — with a dropkick, armlock and body slam.

The senior Wright State mass communication major has dipped her toe into professional wrestling — refereeing matches and training to become a pro wrestler.

Rockstar Pro Wrestling holds Wednesday night matches at the Rockstar Pro Arena in downtown Dayton. The weekly TV tapings draw an audience over a 100 while the Internet pay-per-views draw standing room only crowds the first Friday of each month.

“I’m naturally a shy person, so having to go out there and have a lot of energy and talk to people was the hardest for me,” she said.

Tracey Hill, an administrative specialist with Wright State’s Department of Communication, said Jordan has evolved into one of the best students she has ever mentored.

“Actively exhibiting determination, class and sophistication, Anitra is the perfect example of someone who goes for the brass ring,” Hill said.

Jordan grew up in the Dayton suburb of Jefferson Township. She participated in Wright State’s Summer Bridge and Upward Bound precollege programs and received scholarships to attend Wright State.

Jordan initially wanted to be a sports commentator but is now interested in being a media critic, with her own column or blog. As a young girl, she got hooked on superhero cartoons, initially the DC Comics characters and later Marvel. Captain America was her favorite.

“I really want to work for the Marvel offices, whether it’s doing digital content for their website or writing up stories,” she said.

Despite her love for superheroes, Jordan initially wasn’t interested in wrestling.

But when she was 16, a good friend talked her into watching “WWE Monday Night Raw,” a professional wrestling television program that airs live on Monday nights on the USA Network.

“I was so infatuated with one wrestler. He had really nice abs. I’m a girl, so that was the first thing I noticed.” she jokingly said. 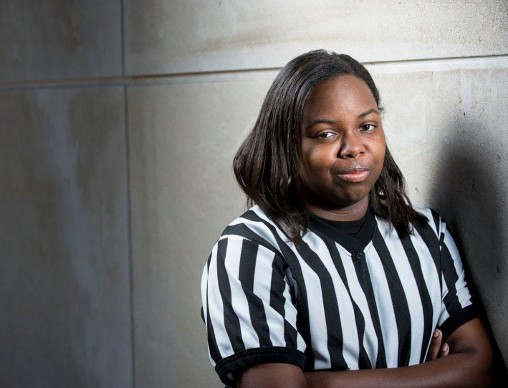 After college, Anitra Jordan wants to be a media critic, with her own column or blog, or write for Marvel comics.

Then it was on to “Friday Night Smackdown.”

“That’s when it really took off because there was a wrestler named Edge,” she said. “It was the way he carried himself. He was really funny and personable. I was just really hooked from then on.”

Jordan got physically involved with wrestling when she was 20.

“I was really shy but still wanted to try,” she said.

“You can tell he cares,” Jordan said.

“What I love about Rockstar is that they are bringing some of the best action in pro wrestling to Dayton, Ohio,” Hill said. “The athleticism, the energy, the excitement blows away the past.”

Jordan began training at Rockstar in May 2013 as a referee. Last August, she wrestled in her first match, teaming up with Benjamin Kimera against Crazy Mary Dobson and Mad Man Pondo.

“We lost, but it was really fun,” Jordan said. “I got a lot of experience and realized that this is what I want to do.”