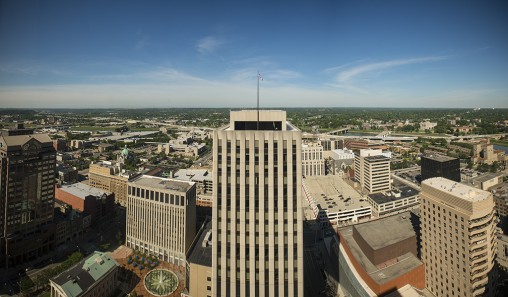 The Dayton region will be assisted in an effort to diversify job opportunities and grow the local economy through a $7 million grant from the Department of Defense (DoD) Office of Economic Adjustment’s Defense Industry Adjustment Program.

The new funding, entitled The Dayton Metro Plan for Economic Diversity, was secured through a collaborative effort of 11 local entities comprised of governments, institutions of higher education and businesses.

The group sought funding to build the region’s commercialization infrastructure and support workforce development in the Dayton metro area.

The effort was led by leaders from the Dayton Development Coalition, Montgomery County and Wright State University with the collaboration aided by representatives from the City of Dayton, University of Dayton, Sinclair Community College, Wright Brothers Institute, Learn to Earn Dayton and Greene and Miami counties. The entities listed comprise the program’s advisory committee.

The Department of Defense’s Office of Economic Adjustment (OEA) was created to help state and local governments respond to major changes in the defense program, particularly those heavily dependent on defense dollars to plan and execute programs that allow them to adjust and diversify their economy. The Dayton region became eligible to participate in the program for two reasons:

OEA recognizes that each community needs to craft a region-wide plan to diversify its business base. As one of the primary SOAR partners, the Dayton Development Coalition worked with regional partners Wright State and Montgomery County to apply for OEA grant funding for a variety of projects that will create new opportunities.

Since OEA grants require a public instrumentality to serve as grant applicant, Wright State has been named the lead grantee for the program and will work through its Wright State Applied Research Corporation to carry out the program.

Key partners in the execution of the program will include:

Additional partners will be sought through an open and competitive contracting process to carry out specific tasks within the program. A total of $1.63 million will be made available to produce specific deliverables across nine contracts over the life of the grant.

The grant allows the Dayton region to continue to diversify its economic base by leveraging the research and development capabilities locally to develop and produce market-ready technologies. The assets at the Air Force Research Laboratory at Wright-Patterson Air Force Base will be central to the effort.

Said Jeff Hoagland, Dayton Development Coalition President & CEO, “This is another step in continuing to support our region’s greatest asset. We will be able to leverage our community’s support of Wright-Patterson Air Force Base while investing in new opportunities for growth. This strategy complements and leverages activities taking place inside and outside the fence to grow the private sector.”

Dennis Andersh, executive director of the Wright State Research Institute, said: “Finding ways to commercialize the technologies in the region’s universities, laboratories and companies can become the biggest economic opportunity for the region. This funding brings together all the key regional stakeholders to keenly focus our efforts collaboratively to grow the regional economy.”

Montgomery County Commission President Debbie Lieberman said: “This project fits directly with Montgomery County’s economic development and workforce strategy and the region’s efforts to diversify and strengthen our economy by bringing the world class technology inside the base into the private sector. Partnerships like this allow us to continue our regional efforts to invest in people and maximize our position in an increasingly competitive global market.”

Phil Ratermann, director of the University of Dayton Research Institute’s FastLane Manufacturing Extension Partnership (MEP), said the FastLane – MEP team is looking forward to engaging with regional partners on the OEA grant to deliver on the economic development initiatives being targeted. “A significant portion of these initiatives align directly with FastLane’s goals to assist manufacturing companies in our region in areas such as new product innovation, workforce development and commercialization of new technologies,” he said.

David R. Hopkins, president of Wright State University, said: “I am so excited about any opportunity Wright State has to work with our partners to make Dayton and the region economically stronger. We need to seize the opportunity with this new funding to continue the economic momentum building in the region through our collaborative efforts with our local businesses, governments and partner institutions in higher education. Diversifying our business base in this region is central to capitalizing on future growth opportunities and responding to major changes in defense programs.”

Steve Johnson, Sinclair Community College president and CEO, said: “A hallmark in the Dayton region is our unique system of partnerships and how we leverage our respective strengths as a team. I’m pleased that Sinclair can continue its world class workforce development operations as part of this project and pleased to be joining such a strong group of partners.”

Nan Whaley, mayor of Dayton, said: “The Manufacturing Communities Partnership designation has opened the door to a variety of exciting opportunities such as this one. The Dayton Development Coalition has been a great partner to the City of Dayton in this effort and we are thrilled for the success of this grant. DDC leadership has been working closely with our federal point of contact, assisted by Montgomery County and Wright State, along with representatives from our other collaborative partners.”