“It was cold on the floor, even with my blanket.”

So said a second-grade student explaining to her teacher that lack of sleep was the reason for failing a test.

Trisha Baxter, a Wright State alumna and second-grade teacher in the Northridge Local School District, discovered that more than half of her students sleep on the floor at night.

“They were tired, sleepy and falling asleep during tests and I didn’t understand why,” Baxter said. “So finally I asked a little girl, ‘why aren’t you sleeping?’ and she said, ‘I don’t sleep so well on the floor even with my blanket.’ And I stopped teaching that day and asked my class how many of them slept on the floor and over half of them raised their hand.” 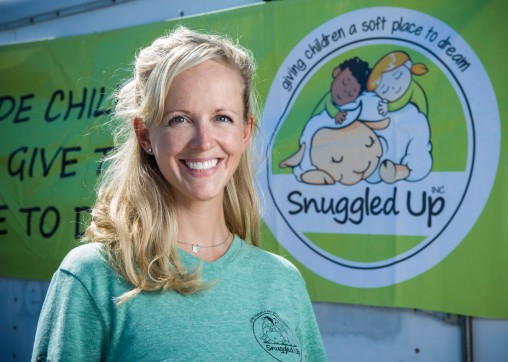 Five years ago, she started Snuggled Up Inc., a nonprofit organization that gives children a “soft place to dream.”

Ryan Black, budget manager to the associate provost and a friend of Baxter’s, said, “When teachers see a student not performing well, they might jump to the conclusion that a student may have a disability rather than consider a lack of sleep. A lot of people don’t realize how many kids are without beds.”

If parents grew up sleeping on the floor, their children often will grow up doing the same, Baxter said. She also said some students act up the last few weeks before school lets out. “They don’t realize why, but it’s because they don’t want to go home,” she said.

Baxter considered how she could help her students. She came up with the idea of distributing Snuggle Kits: a quality cot, mattress, twin size sheet, blanket and pillow, costing $110 per kit. Babies are provided with a separate kit.

All kits are purchased from financial donations and fundraisers. Donations of newly purchased items are accepted.

“One little girl said, ‘I had my first dream last night,’” Baxter said. “Now imagine never having a dream because you’re up all night because you’re cold. To me that was powerful.”

She said kids have told her they didn’t know they could have a bed. Providing beds to students is one way to show her students they are loveable.

After teaching for 15 years, Baxter has gained a different perspective of students.

While attending Wright State as a teaching major, Baxter recalled, “We’re taught to be a teacher and teach the child, that’s my role. With that philosophy, I went into the teaching world and I truly believed that. But I’ve changed my philosophy. … My job is to love these kids and then they can learn.”

While at Wright State she learned that it’s “not just teaching from the book every day, but getting to know that child. … Wright State did a good job with that. It really hit me,” she said. “And whatever greater power you believe in, I believe I was led to my school for a reason. I was led here to do this. So Wright State is what uplifted me to do better.”

Baxter tells her students that she loves them every day.

Snuggled Up Inc. is comprised of full-time school employees and parents who serve as volunteers.

Volunteers include Tara Tarziers, secretary of Snuggled Up; Kelly Gartz, inventory manager; Debbie Neal, who writes thank-you cards to donors; Jenny Kosins, who manages kit requests and coordinates between families and the organization. 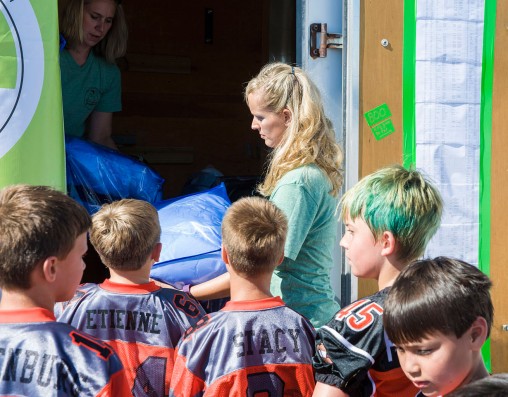 They prepare Snuggle Kits for the families to pick up on distribution days.

“When the kids get the beds — the smiles, the parents thanking me — that’s what it’s all about,” said Neal.

Baxter’s organization had distributed almost 1,000 kits and has 300 families on a waiting list.

“It’s wonderful. I think what she does is great. It gives kids hope,” said one teary-eyed parent whose son received a Snuggle Kit. “It’s good for my son. He will be starting preschool this year. He’ll be able to sleep all night and get up for school in the morning and not be so angry.”

Every year, Baxter has her students draw a picture of their bedroom, including all of their furniture. She said some children may just draw a rug, and then she knows.

“A lot of people don’t think to ask children, ‘where do you sleep,’ but I do,” she said.