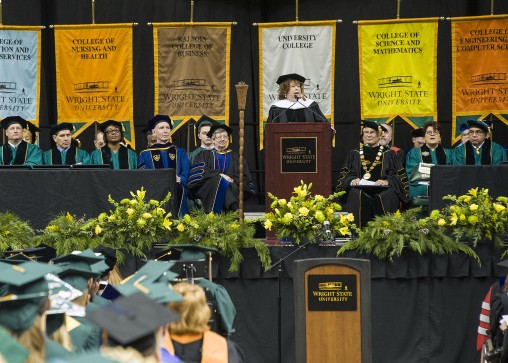 Hundreds of graduating Wright State University students were praised as a special group who believe in standing up for others and urged to put their energies into healing a troubled world and working for peace.

The graduates were addressed by university President David R. Hopkins and Sharon Honaker Rab, founder and co-chair of the Dayton Literary Peace Prize, during fall commencement at the Wright State Nutter Center on Saturday, Dec. 19.

Hopkins said the graduating students have “an unbelievable willingness to stand up for what you believe.”

“I’ve watched you become not passive bystanders but active bystanders in confronting hatred and prejudice and injustice wherever you found it,” he said.

Hopkins said he has watched the students transform the campus with their spirit and unselfish commitment to serve others.

“We live in incredibly troubled times,” he added. “With so much division in our country — and around the world — it’s becoming more difficult for many people to stay positive about your future.”

Hopkins said it is not someone else’s problem to preserve the environment or save a species from extinction or put an end to hunger, homelessness, discrimination and injustice.

“You each have within you collectively the power to help heal the world,” he said. “…I have great faith that you will create a better future for your children and grandchildren than we have passed on to you. I truly believe after meeting and working with so many of you, you will be the greatest generation our world has ever seen.”

Rab, who was awarded an honorary Doctorate of Humane Letters at the ceremony, said the Dayton area has a long history of inventions and inventive problem-solving and detailed her perseverance in creating the Dayton Literary Peace Prize, one of the most prestigious awards in the world.

She urged the graduates to turn a deaf ear to doubters and surround themselves with people who support new ideas and who will help them turn those ideas into reality.

Rab said that when she watches the news and “the world goes dark with terror and angry rhetoric and hatred,” she goes to her office and works on the peace prize.

“Peace is possible,” she told the graduates. “As you each leave to find your place in this world, make sure your mission is to build those bridges that lead to peace.”

For 20 years Rab produced and hosted “Writer 2 Writer,” a cable television show on which she interviewed hundreds of local, national and international authors. A writer herself, Rab’s yet-to-be-published novel “Paper, Scissors, Rock” was a finalist for the Pen Bellwether Award for Socially Engaged Fiction.

Graduates also hailed from 20 different states and Washington, D.C. And the class included 282 international students from 25 nations, with India boasting the largest number of global graduates with 185.

Graduating students ranged in age from 19 to 64, with the average age being 26.