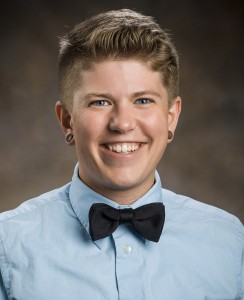 Petey Peterson joined Wright State in July as the director of the Office of Lesbian, Gay, Bisexual, Transgender, Queer and Ally Affairs.

Wright State will formally celebrate the new Office of Lesbian, Gay, Bisexual, Transgender, Queer and Ally (LGBTQA) Affairs with a Launch event on Wednesday, Jan. 27, from noon to 2 p.m. in the Student Union Rathskeller.

All Wright State community members are invited. Light refreshments will be served.

“What we’re most excited about is to showcase what the office can and does provide to the Wright State campus community,” said Peterson (pronouns: them, they, their). “We hope that everyone can leave the Launch event naming at least one way they can get involved with the office and LGBTQA community at Wright State.”

“This is not the end of what our office will produce,” said Scacco. “However, this event is to show our first round of initiatives while also showing that Wright State is dedicated to the success of the LGBTQA community.” 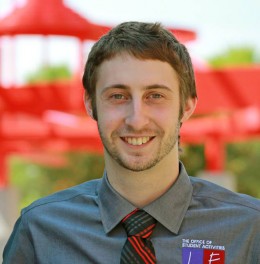 Since July, the popular Safe Space Ally training has been revamped, students who sit on panels participate through developed trainings and tailored educational experiences called Spectrum Sessions are now offered. The LGBTQA Resource Center was renamed the Community Engagement Room and was fitted with student staff and a new look and layout.

The office’s new initiatives include discussion groups and networking available for graduates. Health-related topics will also be discussed within LGBTQA discussion groups. The advisory board will offer a scholarship this semester.

For more information about the Office of LGBTQA Affairs call 937-775-4611 or visit wright.edu/lgbtqa.