It’s a race against time.

Wright State University swimmer Kayla Fearrin is one second away from breaking the school record in the 200- and 100-meter breaststroke. But the senior early childhood education major is in her final season, watching the number of swim meets dwindle and graduation approach.

“She’s swimming faster now than she’s ever swam,” said Kyle Oaks, head swimming and diving coach. “She is by far the best 200 breaststroke swimmer I’ve ever coached as far as female athletes are concerned. If anybody is going to do it, it’s going to be her.”

Fearrin is already part of the Wright State records in the 200 and 400 medley relay, swimming the breaststroke leg. And she has placed among the top eight swimmers the past three years in the Horizon League championships. 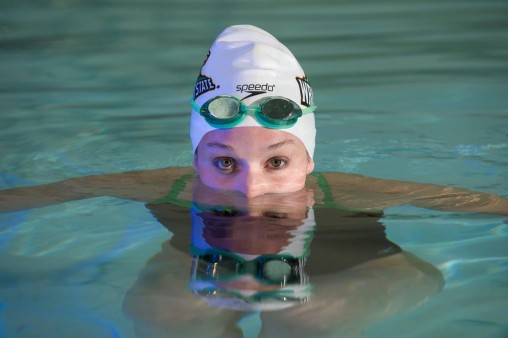 Fearrin grew up in Carmel, Indiana, and began swimming when she was 6. She swam for her high school team, which is on the verge of winning 30 consecutive state championships. Her coaches saw that Fearrin was especially strong in the breaststroke, so they pushed her to improve her technique even more.

Oaks said Fearrin has had to juggle swimming with a very demanding early childhood education program. Fearrin and her teammates are in the pool for practices at 5:40 a.m. She often swims up to six miles and practices four hours a day.

“She is one of the most disciplined people I know,” Oaks said. “She has her up-and-down days just like anybody. But she really displays a lot of character and passion for the sport and passion for her goals — not only in the pool but in the classroom. It’s pretty impressive. She deserves a lot of credit.”

Fearrin says practices can be hard, but they are fun and can relieve stress.

“We’ll have music going, and if we don’t, it’s just you in the pool. It’s kind of peaceful,” she said.

Fearrin is hard of hearing and wears hearing aids when she’s not swimming. But she plays down that hurdle.

“It’s hard for me to hear sometimes in practice, but I have coaches that are willing to work with me. You kind of just get used to it almost,” she said. “I’m very good at reading lips. It hasn’t been as hard as you would have thought.”

Fearrin’s mother is an elementary school teacher and is a big part of why her daughter is majoring in early childhood education.

“After school, I’d be in the classroom, pretending to be a teacher,” said Fearrin, who carries a 3.41 GPA at Wright State. 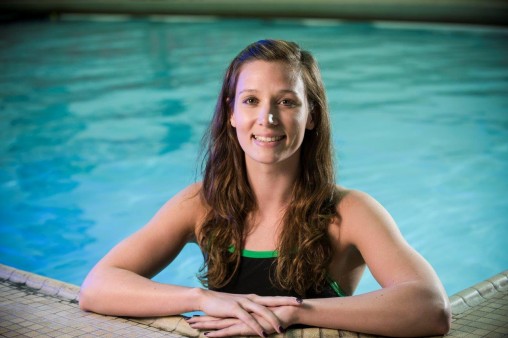 During summer break, Fearrin has done mission work in Belize and Guatemala with her church group.

During summer break, Fearrin has done mission work in Belize and Guatemala with her church group. They staged concerts, played basketball and held a Bible school for the children. In Guatemala, they built a house for a needy family.

“They were just so incredibly happy,” she said. “It just brings tears to your eyes.”

Fearrin said Wright State has helped her excel, both in the pool and the classroom.

“Wright State has given me the opportunity to see where I could go and pushed me to that,” she said.

Oaks said Fearrin has contributed to changing the culture of the team and will be missed when she graduates.

“She’ll be one of those special ones you’ll always remember,” he said. “I just hope we can find someone else who can come close to that type of person. It will definitely be a loss for us, but what she’s done will also last forever.”