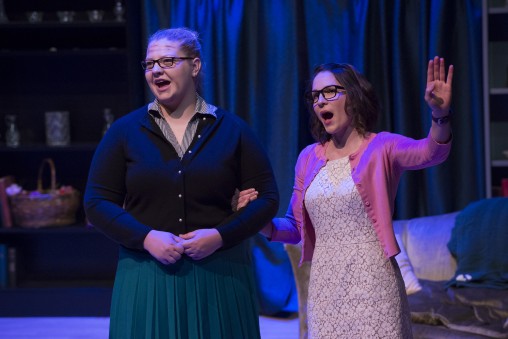 The concert features Giacomo Puccini’s “Gianni Schicchi” and “The Old Maid and the Thief” by Gian Carlo Menotti. Performances take place at 8 p.m. on Friday and Saturday, April 1 and 2, and at 3 p.m. on Sunday, April 3.

“It’s two different fairly sarcastic looks at love. It felt like a good, comfortable pairing for the audience and for the singers,” said Kimberly Warrick, associate professor, director of opera theatre and director of the concert.

Tickets are $12 for adults; $10 for Wright State faculty and staff, all students and senior citizens; and $1 for Wright State music majors (with Wright State ID). For ticket information, contact the Creative Arts Center Box Office at 937-775-2500.

“Gianni Schicchi” and “The Old Maid and the Thief” are one-act operas.

“It’s some of the most beautiful music in the repertoire, so an audience is going to get to revel in these amazing melodies,” Warrick said.

Menotti, who was born in Italy and later immigrated to the United States, has been referred to as the American Puccini. “His melodies have the same beautiful sweeping qualities that Puccini does. So it’s a good musical pairing,” Warrick said.

“The Old Maid and the Thief” is a more modern cautionary tale about not making assumptions. “It’s a commentary on how easy it is for a rumor to grow legs and have a life of its own,” Warrick said.

The fully staged concert feature 18 students and a full orchestra of students and professional musicians. The cast has been rehearsing since November.

“These kids are really wonderfully committed to this,” Warrick said. “We have kids who want to sing for a living. We have kids who are music education majors, and they want to conduct and they’re going to be in charge of their own high school musicals. It’s been a labor of love.”

In addition to Warrick, the production is musical directed by Peter Keates and conducted Ginger Minneman.