League of their own 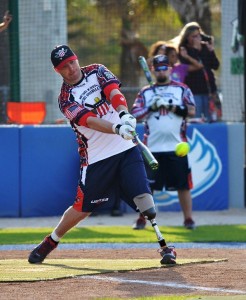 The blast from an improvised explosive device in Iraq cost him his leg and his purpose. Jonathan Herst begged his fellow soldiers to kill him. And when he finally emerged from surgeries and years of grueling rehab, he shuttered himself at home to avoid social interaction.

Today, the 37-year-old Herst has found new purpose thanks to The Wounded Warrior Amputee Softball Team, for which he plays first and third bases and helps the squad help others.

“This team has changed me from being very self-conscious and depressed to seeing so many others in similar situations that I can relate to and confide in,” said Herst. “It has given me back the drive to compete and succeed and realize that to give up is never an option.”

The team is comprised of competitive, athletic veterans and active-duty soldiers who have lost limbs. Over the years, the squad has battled able-bodied teams at more than 150 venues in 35 states.

Herst will be with the team May 21, when the players come to Wright State University for two exhibition games to raise money to build a Fisher House at the Dayton VA Medical Center.

Fisher Houses provide a compassionate-care environment for military families to stay together during times of medical emergencies or crises. The Dayton VA currently needs such a facility and has received a private $1 million pledge, but has been challenged to raise $500,000 for the initial sustainment and operations fund.

The Dayton Warriors Softball Fund is raising money for the Fisher House by selling tickets to the Wounded Warrior games, event sponsorships, program ads and raffle tickets for a luxury suite at a Dayton Dragons game on May 15.

“Warrior Weekend” will feature the two exhibition softball games at Wright State’s Nischwitz Stadium between the Wounded Warriors and two local all-star softball teams. The games will be played Saturday, May 21, at 9 a.m. and 3:30 p.m. Tickets are $20 or $10 apiece.

Wright State’s Veteran and Military Center is supporting the games by paying for Wright State student veterans who want to attend.

The Wounded Warrior Amputee Softball Team is not affiliated with other charities with the words “Wounded Warrior” in their names. Since the inception of the amputee softball team, more than 85 percent of its donations have supported programs helping military amputees, amputee children and medical research.

Herst says being on the team has given him a sense of camaraderie he had found before only in the military.

He began playing organized baseball at age 4 and won all-conference, all-county and all-state honors as a catcher with his high school team in Rockville, Maryland. At Baldwin Wallace College in Berea, Ohio, he played first base and made the All Ohio Athletic Conference team. He graduated in 2001 with a degree in sports management and dreams of becoming a personal trainer and operating his own fitness center.

But after graduating, he enlisted in the U.S. Army, served as airborne infantryman with the 173rd Airborne Brigade and deployed to Kosovo, where he was part of the first parachute jump there. In 2003, he made the first combat jump into Iraq and was later deployed to Fallujah and Mosul at a time of heavy urban combat.

While on foot patrol, he was shredded by the blast from an improvised explosive device — two mortars taped together with a cellphone detonator. The explosion took his left leg below the knee, severed the femoral vein in his right leg and perforated his colon and bladder. It also left him with severe burns and traumatic brain injury.

“Upon learning of the loss of my leg, I begged my men to kill me,” Herst recalled.

He was transported to Walter Reed Army Medical Center in Washington, D.C., where he would undergo 17 surgeries. His mother quit her job to care for him, and his girlfriend flew in from her home in Kentucky every weekend to support his recovery. (The couple would marry two years later.)

A month following the blast, Herst was given a prosthetic leg.

“The rehab was grueling and very painful at times, both physically and mentally,” he said. “Many days I felt the urge to give up but didn’t.”

Herst currently works at the U.S. Department of Veterans Affairs in Lexington, Kentucky, as a licensed clinical social worker and as a mental health therapist in the Substance Abuse and PTSD Residential Treatment Program.

When The Wounded Warrior Amputee Softball Team came to Lexington in 2014, Herst’s wife approached the coach without her husband’s knowledge and asked how Herst could become a player.

“She explained — unbeknownst to me — that since my injury, my self-esteem and quality of life had diminished,” Herst said. “She told him that I would hardly ever leave the house except for work and didn’t allow myself to participate in any activities out of fear I would be judged and be critical of myself.”

A month later, following a tryout, Herst was on the team. And filled with new purpose.