Grateful for Wright State’s impact on their lives, Ron ’76, ’84 and Joan Amos pay it forward for future generations 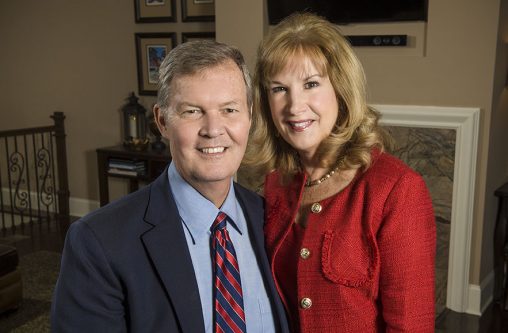 Ron and Joan Amos started a scholarship to provide assistance to Wright State students who are working their way through college. (Photo by Chris Snyder)

Just as Jimmy Stewart’s iconic character, George Bailey, finds out what life would have been like had he never been born, Ron has often wondered what his life would be like had there never been a Wright State.

As one of seven children and a first-generation college student, Ron felt like he had few options for college. It wasn’t until a high school guidance counselor told him about Wright State that he realized there was an affordable choice close to home.

“I may have never gone to college had there not been a Wright State,” said Ron.

Like many Wright State students of yesterday and today, Ron paid for his own college education by working his way through school. He even managed to graduate without any debt.

Always by Ron’s side during his Wright State days was the love of his life, Joan. The couple first met while ice skating at Hara Arena in 1970, when they were both 15 years old. They have been together ever since.

Joan would stay up until 2 or 3 in the morning, typing Ron’s papers as he worked on his finance degree.

“I wanted to go to college, but I felt at that time that I should work and save that money for us,” she said.

For someone who always had an interest in money and economics, a career in banking ended up being the perfect fit for Ron. As a young boy, he had his own newspaper route and knew exactly how much money he had at any given moment.

“It is really about what you can do with this commodity called money — how money can be used as a tool to fulfill the dreams of families, businesses and the community,” said Ron.

Through his work as market president for U.S. Bank, Ron visits many corporations in the Dayton region.

Ron returned to Wright State in the early 1980s to begin working on his master’s degree. In many ways, it was a similar experience to his days as an undergraduate as he once again juggled the responsibilities of school and work. Ron earned his MBA in 1984.

He would come back to his alma mater years later to serve on the board of the Wright State Alumni Association, including a term as president. During his tenure as Alumni Association president, Ron also joined the board of trustees for the Wright State University Foundation. He has served on the foundation board since 2002, including two years as chair.

Ron also chaired the alumni phase for the university’s first campaign, Tomorrow Takes Flight. He and Joan both currently serve on the campaign cabinet for Rise. Shine. The Campaign for Wright State University.

“It’s been like a family,” Joan said of her experience on the campaign cabinet. “They’re so embracing, and they want to know how you feel. They want your input. It just feels like a second family.”

“Joan’s been able to see what I’ve seen for decades — to see what this university does for people’s lives,” said Ron.

Along with donating their time to the Rise. Shine. campaign, Ron and Joan have established their own scholarship fund. The Ron and Joan Amos Family Scholarship was created to help students in similar circumstances to what Ron experienced as a Wright State student.

The scholarship is geared toward the Wright State student who doesn’t have a 4.0 GPA and is working their way through school.

“Between school and work, they’re probably putting in an 80-hour week,” said Ron. “They’re working a lot harder and with much more effort than the typical student.”

Ron and Joan hope their scholarship will help students stay in school who might otherwise have to drop out because of financial challenges. The scholarship also fulfills the couple’s passion for education and giving back to the community.

Before her recent retirement, Joan worked in early childhood education at a Dayton-area preschool for almost 15 years. She still returns to the school once a month to volunteer. She believes that a child’s life will be forever changed if a love for learning can be instilled at an early age.

“It’s just amazing how 4- and 5-year-olds are like little sponges,” said Joan. “They just absorb so much.”

Over the years, Ron and Joan have volunteered for and supported many organizations in the community, including Dayton Children’s, United Way and the American Heart Association.

“There are many organizations that we feel close to in the Dayton area,” said Ron. “We believe in their missions and the impact they have on people’s lives.”

Ron tells his younger colleagues that the great surprise in his life has been the joy he’s received from becoming engaged in the community and making lifelong friendships with the staff and other board members of organizations like Wright State.

“Our lives have been greatly enriched by our involvement,” said Ron. “We have received far more than what we’ve given.”

Much of that gratitude and appreciation is directed at Wright State.

“Wright State is part of our family,” said Joan. “We feel so connected with them and just feel so much at home.”

“To hear the students speak and talk about what drove them to Wright State and how it’s impacting their lives makes you want to do more,” she added. “If you can help one student, Wright State would be the place to do it.”

Thanks to Ron and Joan Amos, future generations of Wright State students will have the opportunity to create their own wonderful lives.