“America Divided,” an eight-part docu-series highlighting different issues of inequality in the United States, including drug addiction, education and immigration, premiered an episode focused on Dayton at Wright State University Sept 6 and 7.

The Dayton episode features actor Peter Sarsgaard as he travels throughout downtown Dayton to learn about the battle against drug addiction and how it has affected Dayton’s prosperity.

It will premiere nationally on the EPIX channel on Sept. 30 and will be available to stream on Amazon and Hulu in January. “America Divided” is executive produced by Norman Lear, Shondra Rhimes, and Common.

Dayton is the top-ranked city in the country for drug overdoses and deaths, specifically related to heroin and opioid use. Dayton’s statistics are representative of increasing drug issues throughout the country.

In the Dayton episode, Montgomery County Sheriff Phil Plummer says 50 percent of the 25,000 inmates that come through the Montgomery County Jail annually are in custody for heroin-related issues. The Dayton Police Department and the coroner’s office estimate that Montgomery County will have 375 400 deaths due to heroin overdose this year.

“Ohio in particular and in the Cincinnati-Dayton areas has a huge drug problem, and it’s something that we need to stay on top of,” said Tiffany Price, a graduate student in the College of Nursing and Health studying psychiatric mental health. “I think anything that we do is important, whether it’s on a small-scale or large-scale, especially something addressing a drug problem across the country. … We have to start in our communities.” 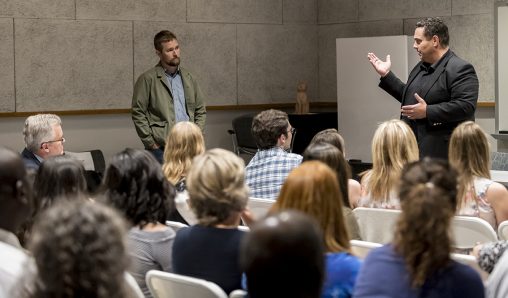 Campus collaborators — including the College of Education and Human Services, College of Liberal Arts, Boonshoft School of Medicine, College of Nursing and Health and the School of Professional Psychology — and area partners work collectively to bring attention to events and initiatives to decrease drug use, opioid overdoses and deaths.

In May, a multidisciplinary team traveled to Washington, D.C., to meet with legislators and offices, including the Centers for Disease Control and the Office of National Drug Control Policy to discuss how universities can impact this and other complex health issues.

The College of Education and Human Services has joined forces with the East End Community Center, Dayton Police, Dayton Mediation Center, Families of Addicts and other community partners to start Conversation for Change. Open to anyone affected by addiction, Conversation for Change facilitates access to lifesaving addiction recovery options and treatment. The innovative program has received attention from Michael Botticelli, the head of the White House Office of National Drug Control Policy.

Conversation for Change is a “non-judgmental way of raising awareness that help is available, that you can choose whenever you’re ready for it,” said Huma Bashir, assistant professor of human services and a mental health clinician.

The program has saved several lives, Bashir said. “I am very pleased with the success of this program. Our faculty and students are working alongside our community partners to literally save lives. Because of this success, we are now expanding Conversations for Change in Springfield,” she said.

“The Integrated Health Institute model is being created to encourage academic and research disciplines to work together, hand-in-hand with the public to address complex community health issues head-on,”said Joseph Keferl, College of Education and Human Services dean. “We have world-class expertise at Wright State, we have decades of research and powerful partnerships in our communities. We must harness the expertise across campus, working together as a multidisciplinary team, alongside our amazing community partners, so that we can solve these complex health issues and improve the health and vitality of our communities.”

“Cumulatively we have the expertise-the key is to now integrate our expertise and energy so that we can tackle problems more rapidly, across the full spectrum of the problem, in coordination with our communities, to achieve lasting results,”Keferl said. “This is our challenge and our opportunity to quite literally save Dayton. Together we will demonstrate a new collaborative model for Ohio and beyond.”

The importance of why the community must come together is portrayed in the final moments of the documentary, Keferl said.

“The last scene is really to show scenes that don’t shy away from the reality of the cost,” said Lucian Read, “America Divided” co-creator. “And put viewers in the situations so they understand how awful and emotional the cost is for the family and the person who died.”