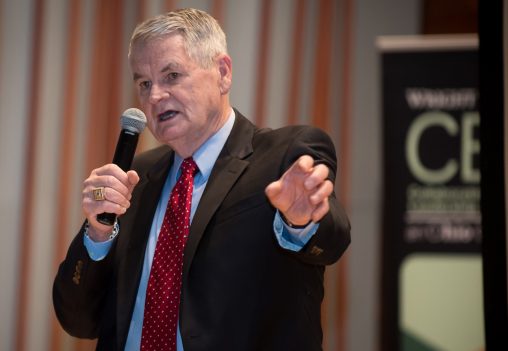 Hall of Fame baseball writer Hal McCoy is next featured speaker in the “Living Legends of the Dayton Daily News Archives” series on Nov. 17. (Photo by Erin Pence)

Hall of Fame baseball writer Hal McCoy will give a special lecture at Wright State University on Thursday, Nov. 17.

The event begins at 7 p.m. in the Endeavour Room of the Student Union. A reception will follow. The event is free and open to the public.

McCoy’s lecture is the seventh in the “Living Legends of the Dayton Daily News Archives” series, sponsored by Wright State’s Department of Communication, College of Liberal Arts and the University Libraries’ Special Collections and Archives. The Living Legends lecture series celebrates the Dayton Daily News Archive, an extensive collection donated to Wright State by the newspaper.

The event will also include exhibits featuring columns, awards and photographs documenting McCoy’s career, as well as items from the Dayton Daily News Archive.

McCoy has covered the Cincinnati Reds since 1972 and is credited with coining the team’s nickname the “Big Red Machine.” He currently covers the Reds for Fox Sports Ohio and writes The Real McCoy blog for the Dayton Daily News.

He was inducted into the Hall of Fame for the National Sportscasters and Sportswriters Association in 2015. In 2002 he was honored by the Baseball Writers Association of America as the winner of the J.G. Taylor Spink Award, which recognizes writers for meritorious contributions to baseball writing each year during the induction ceremony at the National Baseball Hall of Fame.

McCoy is the author “The Real McCoy: My Half Century with the Cincinnati Reds” and “The Royal Reds: Baseball’s New Dynasty.” He also co-wrote “The Official Pete Rose Scrapbook,” with Pete Rose, and “Drawing Pete,” with Jerry Dowling.

McCoy graduated with honors from the School of Journalism at Kent State University, where he played first base on a partial baseball scholarship.