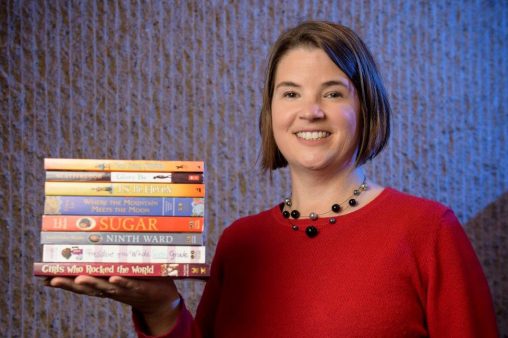 Wright State librarian Maureen Barry built a library to help a group of girls in Dayton build a sense of self-worth and confidence.

“President of the Whole Sixth Grade” and “Girls Who Rock the World.”

These are among the books collected by Wright State University’s Maureen Barry to share with the On Purpose Girls, a group of fourth- through seventh-graders who — with the help of Barry’s library and book club — are building a sense of self-worth and confidence.

“I hope a lot for these girls,” said Barry, First Year Experience librarian for Wright State University Libraries. “I hope they value relationships with other women. I hope that they value reading and learning. And I hope they understand that libraries aren’t just places where you get shushed and all of those other stereotypes.”

The On Purpose Girls project, which is in its second year, is funded by a grant from the Ohio Department of Education. The group of about 30 girls, many of them minorities, meets three times a week at the Aspire Church near downtown Dayton. They are students at the Horizon Science Academy, a charter school that focuses on the STEM areas.

“They are mentored earlier than high school to elevate and inspire these young girls to be purposeful, resilient, competent and service-oriented,” said Barry. “They are very impressionable at this age. Sometimes if you wait until high school to start talking about college or the future, that’s too late.”

The On Purpose Girls project was the brainchild of program director Kim Jarvis, who wanted to start a mentoring program for young girls. She wanted to make available to the girls a library that featured strong female characters of diverse backgrounds. Barry volunteered to build the library and start a book club as part of the program so that there could be a discussion of themed books.

“It fits within the goals of the On Purpose Girls program,” Barry said. “It’s very specifically meant to be for girls to develop a sense of self-worth and confidence. That’s a big part of it. There are a lack of books, stories, that feature females who are leaders. And I think there is a real need for children who are not white to see characters who are like them in their books.”

Barry used donations to buy 30 books for the book club and then collected about 75 more donated by family, friends and colleagues. For recommendations — such as “One Crazy Summer” and “Where the Mountain Meets the Moon” — she turned to fellow librarians, blogs and the Educational Resource Center in the College of Education and Human Services. The library’s grand opening was celebrated Jan. 11.

Aspire Church set aside a small room for the library and to house the books used by the book club. The students do some reading on their own and then meet with Barry to read together and discuss the stories.

“Most of them are super excited to read and are begging to be next,” she said. “I also try to ask them some questions and help them review to make sure they are comprehending what we’ve read together. It’s really fun.”

Barry wants to not only instill a love of reading in the students but increased literacy that can be seen in the classroom and their grades. She has started to get a good idea of what kinds of books “speak to them.”

“There are so many children who don’t even have a book at home,” she said. “So this might make a difference.”

Barry received her bachelor’s degree in education with a focus on sports marketing from Bowling Green State University. She interned in the athletics department at Duke University, earned her master’s degree in library science from the University of North Carolina at Chapel Hill and joined the staff at Wright State in 2005.

Barry, who also serves as adviser to the student book club at Wright State, hopes to get some of those students involved with On Purpose Girls. She hopes the On Purpose Girls library and book club continues to grow.

“It’s a long-term project,” she said. “I am committed to the program.”