All ears for English 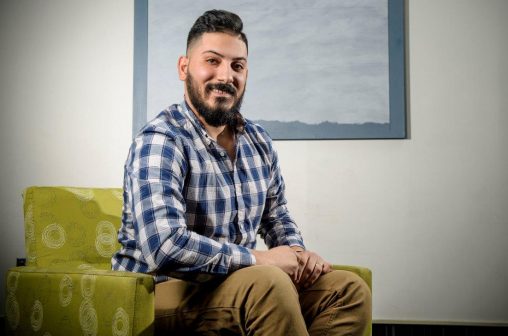 Picture this. It’s your first day as a student in an American high school and you barely know a word of English.

Wright State University senior Khaled Jaber, who grew up in the Middle Eastern nation of Jordan, can tell you all about it. After arriving in the United States in 2005, he found himself a senior at West Carrollton High School fluent in his native Arabic but nothing else.

Today, Jaber speaks nearly perfect English and is scheduled to graduate this spring with a bachelor’s degree in liberal studies and a minor in Arabic. And he will soon begin an internship at Catholic Social Services of the Miami Valley to support refugee families in the area.

“I know how difficult it is to settle not only in a house or a city you’re not familiar with, but in a country,” he said. “To have the opportunity to help someone in need is going to give me that satisfaction of knowing that I helped someone.”

Jaber grew up in Amman, Jordan, where his father taught special needs children at the high school level.

As a kid, Jaber played soccer and spent a lot of time with his friends.

“Every day we had an adventure,” he recalled. “For example, we would play in abandoned houses and buildings at night. That was interesting and scary and most definitely fun.”

“I was into Hollywood a lot,” he said. “I love comedies. I love anything funny.”

“Your family is not only your household; it’s also your neighbors and your friends,” he said. “That’s the part I miss about being here. You don’t have a social life as much. Life here revolves mostly around work and school.”

Jaber’s family decided to move to the United States because getting a private education in Jordan was very expensive. They settled in West Carrollton so his father could pursue a business opportunity.

That’s when Jaber found himself at West Carrollton High School with little grasp of English.

“I came to discover that the students were a huge part of me learning English. I was always grateful when a student corrected me. Every time I would speak in English, I was wrong 99 percent of the time. And the students weren’t afraid to correct me. They weren’t making fun of me; they were correcting me. The teachers were also very understanding.”

Those “corrections,” his English classes and following the dialogue in American movies helped Jaber learn the language.

After graduating in 2006, he held a variety of jobs — from working at grocery stores to cellphone businesses, several of which he managed.

Jaber helped support his older brother and his twin brother, both of whom attended and graduated from Wright State. In the meantime, Jaber fell in love with a woman who would become his wife. After the couple had the first of their three daughters, Jaber decided to enroll at Wright State.

Language is a big part of Jaber’s career goal – but not English. After graduation, he hopes to find a job teaching Arabic.