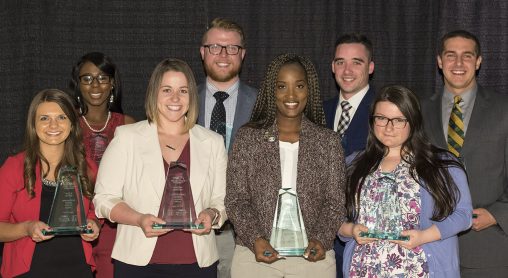 Wright State University prides itself on being the best university for the world, as a reflection of the difference students make through their field of study and as outstanding leaders.

Dozens of award winners were recognized at the Student Leadership Recognition Reception hosted by the Office of Student Activities on April 13.

“I hope audience members saw people who they look up to being recognized for their hard work,” said Lindsey Steller, coordinator of the event and the student organization and leadership graduate assistant. “Our students do fantastic things on campus, and while too often the work goes unnoticed, this was a night where we can brag about our students.”

This year, the Office of Student Activities received over 300 nominations, eclipsing last year’s 250.

Whether it’s by collecting scientific data, learning another language, contributing to the community or creating new dance moves, students impact the university and the community through their dedication to succeed.

Casey Walker, a sophomore majoring in nursing, won an Advanced Student Leader Award. An effective leader has “an attitude of servanthood,” said Walker, who works as a student ambassador for undergraduate admissions and is a member of Habitat for Humanity.

“I’m a leader behind the scenes. I can show what an effective member of the club looks like,” she said.

Brontée Jeffries, a senior and sociology major with a minor in French, won a Senior Leader Award. She serves in the Air Force Ohio National Guard, works as an aviation resource manager in the 179th Airlift Wing operations group, is a peer adviser in the Veteran and Military Center, is a resident assistant, president of Wright State’s Black Women Striving Forward, a member of Alpha Kappa Alpha Sorority and volunteers in the community.

“I really love serving people,” she said. “I just want to always continuously help other people in hopes that they find that light inside them and that they want to do the same for others to find their own light.”

Jordan Collins, a junior mass communication major, received an Advanced Student Leader Award. She is the director of April Craze and a peer mentor in First-Year Programs.

“I’m proud of myself,” she said. “It feels nice that I’m making an impact. I’m hoping my leadership continues to make an impact for the school.”