It has played host to ecology labs, anthropology digs and studies on garlic mustard, orchids and honeysuckle. Art students capture it on canvas, ROTC students use it to train, and others use it to bird-watch, hike and seek refuge from the helter skelter of daily life.

It’s the Wright State University woods — 225 acres of forest that is home to up to 110 species of birds as well as foxes, coyotes, deer, salamanders and even the rare Indiana bat.

In December, the university created a 15-acre conservation easement in the woods to protect the bat and other endangered species from habitat-destroying development.

“Fifteen acres of the woods is now permanently protected,” said Thomas Rooney, professor of biological sciences. “It’s a single 15-acre plot, and it protects that really rare forest that is less than 1/100th of 1 percent left in Ohio. So it’s protecting that really, really unique stuff.” 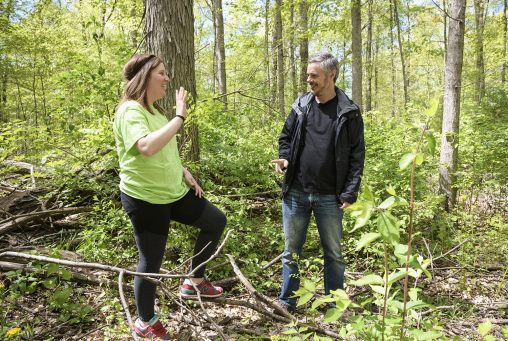 Thomas Rooney, professor of biological sciences, and Molly Simonis, a graduate biology student, in the Wright State woods, where a 15-acre conservation easement will protect a rare bat and other endangered species from development. (Video by Kris Sproles/Photos by Erin Pence)

Rooney said the rest of the acreage is not formally protected.

“Those of us on campus who really care about the woods are looking to expand that conservation easement or put broader protections in place for the woods,” he said.

The woods is the second largest patch of forest in Greene County. Part of it is old-growth forest, meaning it is more than 100 years old. Some trees are actually more than 300 years old. The woods is populated with sugar maple trees as well as great oak, buckeye and other hardwoods. Many trees have fallen, providing a habitat for salamanders, beetles and other creatures.

Biology professor Don Cipollini and his students have published at least 30 papers on projects conducted in or around the woods. All 20 graduate students Cipollini has graduated have relied on the woods for some aspect of their research, from invasive plants to plant-insect interactions and even emerald ash borer. One of the trails is dedicated to Jim Runkle, professor emeritus and longtime woods researcher.

The woods is used for faculty and staff development as well as teaching. Cipollini has done demonstrations of maple syrup production in the woods. And it provides benefits to the campus ecosystem such as temperature regulation, erosion and wind control, and a haven for biodiversity. Cipollini and his students are working to develop prairie plantings around the woods.

“I don’t know if I would have accepted a job here at Wright State if it wasn’t for the woods,” said Rooney. “When I came here, I already knew about this woods. It was a property that had been studied for 30 years, and I had read about it in the scientific literature.”

Many migrating birds pass through the woods on their way to Canada, using it as a stopover. The largest animal in the woods is the white-tailed deer. And there is a rare genetic type of deer known as a piebald that is part white and part brown, sort of speckled.

“These are even rarer than an albino deer,” said Rooney. “It’s part of what makes the woods unique.”

The woods also features a unique genetic variation of trillium, a three-leaf, three-petal, white-and-purple woodland flower. It also has Puttyroot Orchids, which are considered borderline threatened in Ohio.

“We might have the biggest population here in the campus woods of anywhere in the state of Ohio, and nobody knows about it,” Rooney said.

Molly Simonis, who is working on her master’s degree in biology, is taking inventory of Ohio’s bats, including the Indiana bat, which has been tracked to the woods by the United States Fish and Wildlife Service. Indiana bats use roosting trees, where the mothers give birth to and nurse their pups over the summer.

The Indiana bat has been endangered since 1967, largely because of disruption during hibernation and habitat destruction. However, it has recently become even rarer because of White-nose Syndrome, an infectious disease named for the white fungus that infects skin of the muzzle, ears and wings of hibernating bats. Millions of insect-eating bats in 30 states and five Canadian provinces have died from the disease.

“They’ve been on the brink for a long time,” said Simonis. “You can maybe call it a success that we’ve held on to them for this long. But there is a grim future for them since White-nose Syndrome has spread to our state.”

Some species of bats feed on agricultural pests such as the cucumber beetle, one of the most destructive pests for corn and soybean crops. So a healthy bat population could reduce the need for pesticides.

Simonis is also analyzing data on bats collected on mobile acoustic routes by the Ohio Division of Wildlife.

Bats maneuver through their environment and detect prey using echolocation, where they emit ultrasonic sound waves typically too high in frequency for humans to hear. If the waves strike an object, a reflected wave is created that returns to the bat.

Advances in technology have resulted in equipment that is able to record echolocation calls that can be used to identify different bat species. Wildlife workers drive around using ultrasonic bat detectors and vehicle-mounted microphones to record calls emitted by bats shortly after sunset, when the animals become active.

Simonis says her research may provide more data to underscore the importance of expanding protection of the bats in the woods. 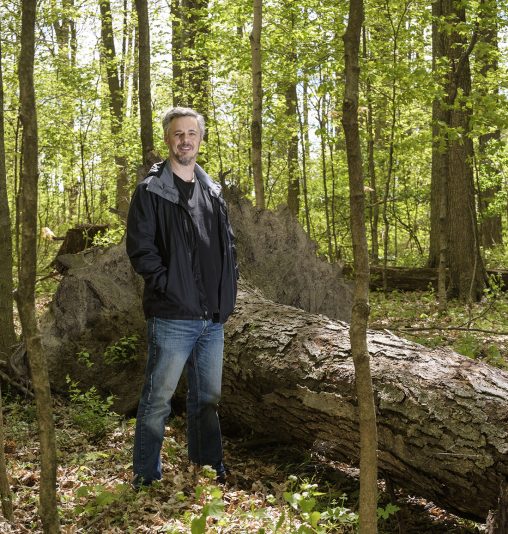 Rooney encourages students, faculty and staff to take a break and go for a walks in the woods.

The woods is open for use by students. However, fires, camping and riding bicycles on the trails are not allowed.

The woods is also a magnet for members of the outside community. They come for bird watching or for hiking the trails.

Rooney said the tranquility of the woods can be a stressbuster during days when things aren’t going well.

Rooney encourages people to go for a walks in the woods.

“In 30 minutes you can forget where you are in this big bustling area and see if you can imagine being transported to someplace else where the pace of life is a bit slower,” he said.