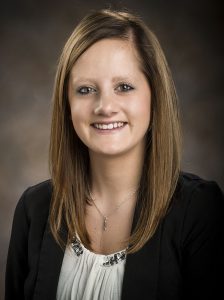 Katie McGrath ’17 was honored as Volunteer of the Year by A Special Wish.

Wright State graduate Katie McGrath had open-heart surgery as a baby, which made it very easy for her to feel connected with A Special Wish Foundation – Dayton, an organization that grants wishes to children and adolescents who have been diagnoses with a life-threatening disorder.

At Wright State, McGrath worked as the graduate assistant to the Office of LGBTQA Affairs, as well as facilitating Safe Space Ally Development, Our Voices Panels and Spectrum Sessions. She also served as a president’s ambassador. She enjoyed networking with professionals at Wright State, as well as getting to know the president of Wright State.

“I got to know Dr. Hopkins on another level,” said McGrath, who graduated in April with her master’s degree in educational leadership.

McGrath was recently honored as the first recipient of the Ruth Wiles Volunteer of the Year award from A Special Wish Foundation – Dayton.

She began working with A Special Wish Foundation in 2012 through an internship program between the foundation and the Wright State Nonprofit Leadership Alliance. During her internship, McGrath learned all aspects of what goes into running a nonprofit organization. A favorite responsibility of hers was when she would help assist in the granting of a local child’s wish. For example, when a child wishes to go to Walt Disney World, McGrath worked with A Special Wish partners to secure flights, lodging, park tickets and other related needs to make the wish a once-in-a-lifetime experience for the child and the child’s family.

After her internship was completed, McGrath continued to volunteer with A Special Wish, volunteering whenever she was needed and playing an essential part in the success of many events throughout the year.

“I’ve gotten a lot of event management experience, so that’s been really cool,” she said.

McGrath said that through the events, she has gotten to know the families who are associated with A Special Wish. She also keeps in touch with “wish kids” who she has worked with in the past.

“It’s been phenomenal,” she said.

On the day of the award ceremony, McGrath was in Illinois, dropping her brother off at college. Seyer asked McGrath if she was going to be there, but she had to decline. “It’s a seven-hour drive, so there was no way that was happening,” she said.

David Seyer, executive director of A Special Wish Foundation – Dayton, had the award ceremony recorded and sent a copy of the recording to McGrath, surprising her with the honor. When McGrath watched the video and realized she was the first recipient of the award, she was shocked.

“I replayed it and then I just started bawling,” she said. “To even be considered in Ruth’s area was just so rewarding and so humbling. I just cried and cried and cried.”

The award is named after Ruth Wiles, who has volunteered with A Special Wish since 1988. Wiles began volunteering to help her daughter, who was then a board member for the organization, deliver wishes to children. Then she became A Special Wish’s first paid employee. Since her retirement in 1995, Wiles has continued to volunteer by delivering wishes. She has delivered over 200 wishes to children.

“Ruth is amazing. I know her very well,” McGrath said. “Ruth is someone you just want to be.”

When the committee met to choose the first recipient McGrath was the unanimous choice. “Katie was the perfect choice to receive this prestigious award,” Seyer said. “She is dedicated to the organization and the children we serve. She embraced all aspects of not-for-profit stewardship, and it was an honor and a privileged to have her in the ASW offices.”