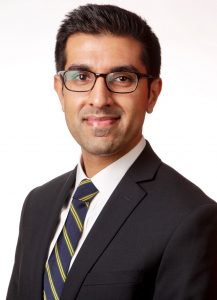 Ramanjot Kang, a fourth-year medical student at the Boonshoft School of Medicine. (Photo by ASCO/Todd Buchanan)

This is the second year that Kang has received the award. He was one of four medical students selected to return to the program with new and/or continuing research.

The ASH program encourages underrepresented minority medical students to pursue careers in hematology by supporting them as they implement their own hematology-related research project in the lab of a research mentor. ASH is the world’s largest professional society of hematologists dedicated to furthering the understanding, diagnosis, treatment and prevention of disorders affecting the blood, bone marrow and the immunologic, hemostatic and vascular systems.

Kang will receive $7,000 to help cover his research projects and travel expenses to the 59th ASH Annual Meeting in December in Atlanta, where he will present his research findings during a special session. He presented his research in December 2016 in San Diego and was recognized with an Abstract Achievement Award.

Kang’s original research project, “The Development of Autoimmune Diseases Following HPA-1a Alloimmunization in Fetal-Neonatal Alloimmune Thrombocytopenia (FNAIT),” focuses on a blood-related disease that affects newborns. During pregnancy, platelets are able to cross the placenta. In some cases, these platelets have antigens, substances that the immune system views as foreign to the mother’s body. Antibodies form, destroying the platelets.

“In the current study, we will examine if this finding holds true for other types of platelet incompatibilities,” Kang said. “We will see if mothers that form antibodies against platelets with antigens other than HPA-1a are also predisposed to developing autoimmune diseases.”

Kang has been working with his MMSAP research mentor, James Bussel, M.D., of Weill Cornell Medicine in New York, New York. He also is working with his MMSAP career development mentor, Mukund Dole, a pediatric hematologist-oncologist at Dayton Children’s Hospital and an associate professor of pediatrics at the Boonshoft School of Medicine. During the 2017-2018 academic year, he will work on his research at the Weill Cornell Medical College/New York-Presbyterian Hospital.

“The mentorship experience has helped me learn about the role of research in patient care,” said Kang, who wants to pursue a residency in internal medicine followed by a fellowship in hematology/oncology. “My mentors have helped me narrow down my research interests. They have helped me determine the next steps I need to take as I map out my career.”

Kang, who was born and raised in Queens in New York City, is a first-generation American and the first in his family to finish high school and college. He earned his undergraduate degree in psychology and a graduate degree in biology from New York University.

Despite his interest in medicine, it wasn’t until a family member was diagnosed with cancer that he began to better understand the complex nature of medicine. The experience cemented his desire to pursue a career in medicine. While he was in medical school, another family member’s diagnosis of acute lymphoblastic leukemia piqued his interest in pediatric hematology-oncology.

After he completes a fellowship in hematology/oncology, he would like to work at an academic medical center, dividing his time among research, teaching and patient care.