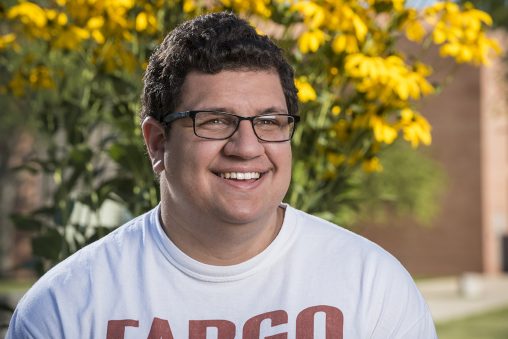 Hasan Karim, a 2017 mass communication graduate, was among a group of Wright State alumni and students who won regional Emmys. (Photo by Will Jones)

Wright State University alumni and students were nominated for awards and honorable mentions from the Ohio Valley Regional National Academy of Television Arts and Sciences for videos they produced during class projects.

Jennifer Ware, professor of communication, and Ashley Hall, professor of English language and literatures, advised the students in their work.

The student awards, which are sponsored by the Ohio Valley Chapter of the National Academy of Television Arts and Sciences, will be presented on Aug. 5 at the Lawrenceburg Event Center in Lawrenceburg, Indiana.

Karim documented the story of family friend Pierre Boumalhab, who owns his own auto body shop in Dayton. Boumalhab moved from Lebanon in 1992 and opened his shop in 1997.

Karim created the video for an audiovisual communication class. Over two eight-hour days he filmed an interview with Boumalhab as well as the daily work in his shop. Because he had to get close-up shots of the work, he said he sometimes had to put the camera very close to the workers’ faces.

“That can be awkward because I’ve never put a camera in someone’s face before, and they’ve never had a camera in their face as they were trying to work before, so we had to find a balance of getting the shot you want, but not being a nuisance to the people you’re shooting,” Karim said.

The title of Karim’s documentary is “Life on the Red Line,” which came from his friend’s brother in-law who likes cars. The “red line” is a slang term for the floor where a mechanic works.

“I called it ‘Life on the Red Line’ because the whole story is about Pierre being in the auto body industry,” Karim said.

Ware taught Karim how to use the equipment and how to work with his footage to make it look better. But she also left him a lot of room to grow through the assignment.

“She was very hands-off, but she was there when we needed her,” he said. “She guided my hand through the entire project.”