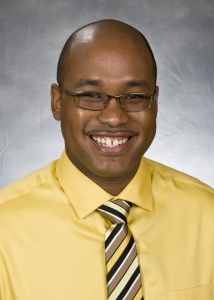 Charles Grant III is a fourth-year medical student at the Boonshoft School of Medicine.

Charles Grant III, a fourth-year medical student at the Wright State University Boonshoft School of Medicine, has been named the national vice president for the Student National Medical Association (SNMA), the oldest and largest medical student organization dedicated to serving the needs of underrepresented minority students who wish to pursue careers in the field of medicine. As vice president of SNMA, Grant is responsible for leading committee activity and implementing the agenda for the year.

He is just one of a few recent Boonshoft School of Medicine students who have served in national leadership positions for SNMA. From 2016-2017, Christen Johnson ’17, M.D., was the organization’s national president. Topaz Sampson ’15, M.D., also served as president from 2014-2015.

“To know that SNMA’s membership elected me to hold this position gives me great pride and a huge sense of duty to make them proud,” said Grant, a native of Enumclaw, Washington. “When I first started medical school, one of my goals was not just to grow into an excellent physician throughout my training. I also wanted to become someone who can advocate for my community as a leader, especially in regards to youth mentorship, guidance and health education.”

The SNMA has been a big influence on Grant, helping to develop his skills as a leader while teaching him how to navigate systematic policy changes that have impacts on underserved communities. “Being able to move up the ranks to this position is truly an honor and makes me want to work even harder for our membership and communities,” Grant said.

As vice president, Grant would like to increase communication and collaboration between SNMA committees. He says this would help members produce more diverse and cohesive approaches to improving programming and reach sponsorship goals. He also plans to build on the organization’s pipeline programs around the country to expand national sponsorship opportunities and funding so they can have the most impact in their surrounding communities.

Grant also hopes to increase the level of cultural understanding and diversity in medical education. Student and faculty populations can help in achieving that goal.

The importance of diversity is key for Grant, who overcame many obstacles to make it to medical school. Raised by a single mother in a family whose members had not pursued higher education, he encountered numerous disadvantages along his journey, including a lack of guidance.

Grant took community college courses to save on costs while working his way through undergraduate school. After earning his associate degree and saving enough money, he was able to transfer to Western Washington University.

“I continued to work nights and weekends during my undergraduate studies to pay tuition and expenses,” Grant said. “School was rough, and I worked super hard to survive.”

He has employed the same work ethic as a medical student, excelling in his studies while balancing a passion for volunteering. Grant has served as a class representative on the medical school’s Liaison Committee on Medical Education student committee, as an instructor in the Prematriculation Program and as a tutor to undergraduates at Wright State University.

He also has been active within the Latino Medical Student Association and is a bass singer in the Tuneshoft a capella group. In the future, Grant would like to pursue a career in emergency medicine.

“I am really blessed to be a part of the Boonshoft family, and I’m honored to represent them not only in SNMA’s national leadership but in our community as well,” Grant said.