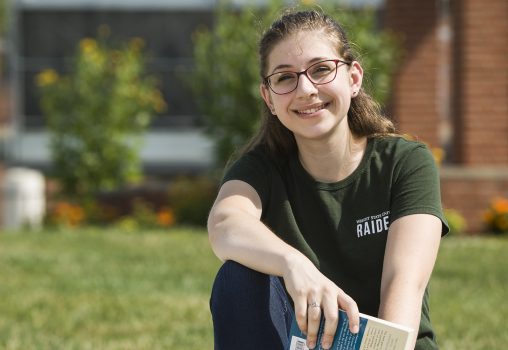 Lina Nahhas, who is majoring in English, is one of 174 undergraduate students who were high school valedictorians or salutatorians in Wright State’s entering class. (Photo by Chris Snyder)

Wright State University has always been a home for top area high school students and this year’s incoming class is no different.

“All of the new students met or exceeded the required GPA, making this the largest incoming class of val/sal students and the largest total group of these highly qualified students in any given year,” Ashley said.

“Because they chose Wright State University we are able to proudly tell their stories throughout Raider Country, and we can share the praises of them with their high schools. This program is a win-win for all of us,” Ashley said.

Lina Nahhas, valedictorian of Dominion Academy in Dayton, is one of those stories. She traveled the world before she began grade school, living in Thailand from age 4 to 8. She attended an international school, so she did not have to learn to speak Thai, but she was immersed in Thai culture.

Nahhas, an English major, lived in the city of Chiang Mai, where she experienced Thai festivals such as Loy Krathong, which is a water festival.

“If you go out during the festival, you will get soaked. There’s water guns and water balloons everywhere,” she said.

Nahhas said that Thai food is very good and very different from American food. “It’s nice and cheap,” she said. “There are noodle shops you can go to everywhere. It’s fabulous.”

Before Nahhas lived in Thailand, she spent a month in the Philippines. While she she doesn’t remember much of it, since she was very young at the time, she remembers that they had to take baths in a river.

Once she moved back to the United States, she attended public school for a few years before being homeschooled and eventually attending Dominion Academy, a college preparation school, through high school.

“Jacques is an interesting character,” She said. “He’s one of the few who doesn’t get married, and although he’s technically a guy, I play him as a girl. He doesn’t like that they eat the deer, because they’re living in the forest and he’s annoyed about that. He just walks around singing.”

During her performance as Jacque, Nahhas played music on her guitar she wrote herself. She said she has always liked music and has played guitar since middle school.

“I don’t really care what genre something is, I just like real music and when the lyrics are more important. I don’t like fluffy lyrics,” she said.

Nahhas said she considered majoring in music, but decided she could continue music as a hobby while she pursued a degree in English. She plans to participate in choir during the fall. Her ideal career is to work as an editor.