Wright State University will invest in its priorities in order to achieve a shared vision that will propel the university to a greater future, President Cheryl B. Schrader told an audience of several hundred students, faculty and staff during her first State of the University Address.

Schrader encouraged faculty, staff and students to take on an “opportunity mindset” as the university addresses its challenges.

Although daunting, she said these challenges also present a “once in a lifetime opportunity to shape this institution, Ohio and beyond.” The community should view actions that have placed university on firmer financial footing as an investment in the future that will make Wright State leaner and stronger.

“I have no doubt that — if we all work together — we can overcome any challenges that come our way,” she said.

Schrader said the university could be Icarus — who ignored his father’s warnings of complacency and hubris — or the university’s namesakes, the Wright brothers — who invented the first practical flying machine through discipline and accountability.

“Wright State finds itself on a precipice, ready to soar,” she said. 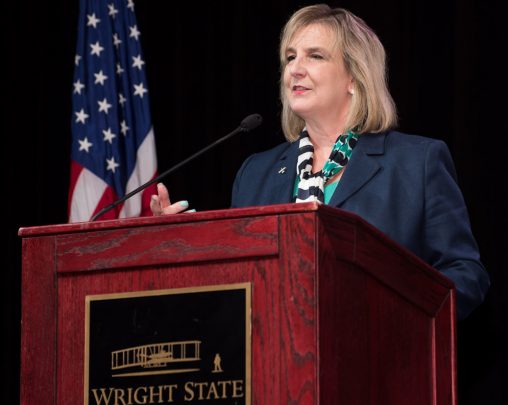 In her first State of the University Address, Wright State President Cheryl B. Schrader said that by working together the university community can overcome any challenge. (Photo by Erin Pence)

During her first year as president, Schrader is focusing on financial sustainability, administrative transparency and campus conversation.

Schrader and Walt Branson, the university’s new chief business officer, will work with the campus community to place the institution in as strong a financial position as possible by the end of the fiscal year.

The president has met with hundreds of students, faculty and staff, including a daylong visit to Lake Campus. During her address, she reiterated her commitment to developing strong relationships with university employees, who, she said, “form the very heart of this institution.”

As part of Schrader’s effort to improve communication, the university will hold a series of community forums called Let’s Talk. The first will feature a discussion on the Wright State Research Institute and the Wright State Applied Research Corporation on Oct. 3.

This fall, the university will also begin working on a shared strategic plan involving thousands of stakeholders. The plan, Schrader said, will provide a vision and focus that links resources to the community’s values and strategic priorities, while also helping to determine a clear sense of purpose and meaning that is a critical foundation for resilience.

“We will forge a new path together as we begin creating a bold, comprehensive strategic plan that will guide Wright State into its next 50 years,” she said.

When she joined Wright State in July, Schrader asked Wright State community members to share with her their vision for the university in 10 years. Responses have revolved around several themes related to the university’s financial health, academic programs, campus life, and morale.

In a decade, the community would like to see academic programs become even more robust, with colleges, departments and programs collaborating across disciplines and traditional boundaries.

“You envision that in 10 years our Lake Campus has grown into an even larger powerhouse,” she added.

Respondents also hope students, faculty, staff and alumni feel a reinvigorated sense of pride in the university. “You recognize that our people are our biggest asset and you want to make Wright State a happier place to live, learn and be,” Schrader said.

Community members want to see an enhanced and expanded campus life that makes Wright State the university of choice for students.

“I share your vision for Wright State,” Schrader told the audience. “Together, we will make that vision a reality.”

The university’s strategic plan, she said, will utilize the talents and extraordinary capabilities of students, faculty and staff to make the dreams of Wright State family members come true.

“As we begin our strategic planning process this fall,” she said, “I hope you will never lose sight of one thing: excellence abounds at Wright State and you are all part of that excellence.”