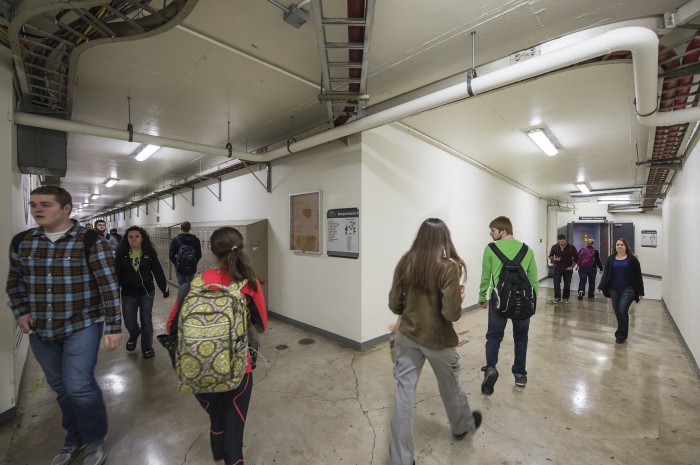 The Wright State tunnel system is believed to be one of the most extensive collegiate pedestrian tunnel systems in the United States. Nearly two miles of tunnels (10,436 feet) snake their way beneath Wright State’s Dayton campus linking 20 of 22 buildings in the academic section of campus.

Students at an Ohio university can go underground during bad weather thanks to a network of tunnels.

“So when it’s raining outside as long as you get in a building upstairs and you come down here you’re good,” said student Will Lofton, of Dayton.

“You can make it to any class on time without getting wet, without being cold and without being too hot,” Lofton added. “As long as you get from the house to the tunnels, you’re pretty good.”

The tunnels make the southwest Ohio campus more accessible for students who use wheelchairs and other aids and the system has become a selling point for students with disabilities.

Rumors have swirled for years that the subterranean hallways were used for secret military experiments. Others speculated that they served as a bomb shelter for nearby Wright-Patterson Air Force Base.

Maintenance tunnels were constructed to connect the university’s first two buildings when they were built in the 1960s, says archivist Chris Wydman. Administrators decided to fully incorporate the tunnels as the school expanded with more facilities, according to the Wydman.