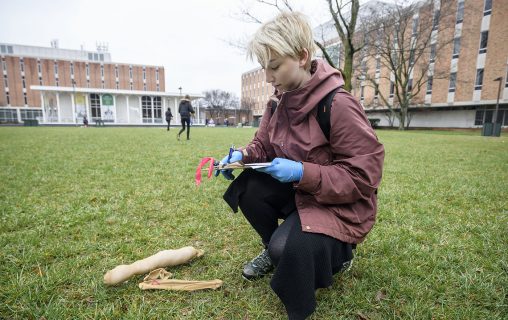 Anthropology major Allyson Cole participated in a mock disaster as part of a forensic anthropology course.

Stuffed pantyhose and pieces of plastic made to look like human limbs, teeth and airplane parts lay scattered on the Quad at Wright State University as students with clipboards picked their way among the debris.

It was a mock disaster yet realistic lesson in forensic anthropology on a cold and rainy March 30 as part of a course taught by Amelia Hubbard, assistant professor of anthropology.

“I want them to have a healthy respect for how difficult this work can be,” said Hubbard. “The ability to map and spatially orient this kind of information is really important. And that is a very marketable skill set right now.”

Hubbard is a biological anthropologist, does archaeological research and is a specialist in human remains. She has been called by police multiple times to identify remains even though none have turned out to be human.

The exercises involved two different “crime scenes.” One was the discovery of a skeleton in a wooded area. The second was a mass disaster stemming from a plane crash.

“If you find a skeleton in the woods, it’s been there for awhile and can sit there for a few more days,” Hubbard said. “But if you have a plane crash, the blood will begin to pool around the tissues, discoloration can happen and obscure tattoos or birthmarks and things that are unique to that person.”

In the second scenario, a charter plane flying out of Rickenbacker International Airport near Columbus sends out a distress signal. Students attending morning classes at Wright State hear a loud “pop” and then see debris began to fall from the sky onto the Quad.

The anthropology students were divided into teams to search the crime scene, map the bodies and document and collect related evidence. They would then analyze the remains in the lab and present their findings.

Items on the Quad represented severely burned remains, severed fingers, teeth or a piece of the plane. Nail polish on the stuffed pantyhose and plastic bones helped specify the item.

Students were told to collect the human remains first and bring them to three different simulated triage tents to be identified by the FBI, forensic dentists and other specialists. But if they found the plane’s black box, they were to get it to a specialist immediately so the cause of the crash could be investigated.

“We talk a lot about the ethics, the responsibility,” said Hubbard. “You need to do things quickly, but you need to do them right. If you don’t, that’s the difference between returning the remains of a loved one back to their family or forever messing it up. Or it can hurt the ability to prosecute if a case involves tampering with the aircraft.”

Jason Wilkes, an anthropology major from Kettering, was inventorying and analyzing teeth.

“The big thing is trying to get things picked up and annotated in a quick manner,” he said. “You’ve got to write down every single little thing, including your GPS coordinates. You’ve got to take pictures. It’s a little bit of a process.” 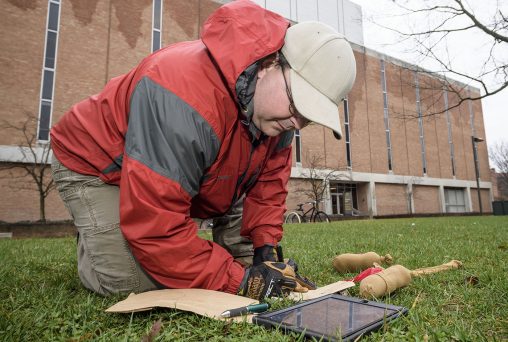 Wilkes hopes to go into forensic anthropology or forensic archaeology.

“This was a perfect exercise for me,” he said.

Benjamin Joel Mauer, an anthropology major from Centerville, hopes to work at a museum.

“Understanding how human remains at mass disaster sites are handled, are processed, would really help if I had collections with items that came from disasters such as 9/11,” he said.

Hubbard said the course is designed to give students a theoretical understanding of what forensic anthropology looks like, the specialists they would work with and the challenges of the career.

“Instead of just focusing on how to identify one’s age, sex and other characteristics in remains, we talk broadly about what the work is like and areas of expertise to brush up on that would make you more marketable,” she said.

Many anthropologists interested in forensic science will go into related fields such as chemistry, genetics, osteology, anatomy or dentistry.

“There are a ton of career options for anthropologists,” Hubbard said.

Students in the current class are all undergraduate anthropology majors, but the course is open to any student.

Hubbard has worked at excavation sites and with museum collections. She is currently working with a team excavating a historic cholera cemetery between Circleville and Chillicothe. They are looking for evidence of Irish canal workers who contracted cholera, died and were buried in a mass grave sometime in the 1800s.

“It could shed more light on the nature of cholera as a disease,” she said. “Does the cholera manifest itself in bones in certain ways? Sometimes pathogens are still active.”