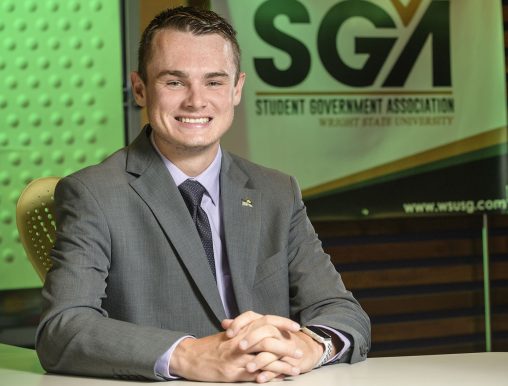 Daniel Palmer, Student Government president for the 2018-2019 academic year, wants to be president of the United States someday.

Daniel Palmer was elected student body president for the 2018-2019 academic year. He is a senior business economics major and wants to be president of the United States someday.

Palmer, who lives in Springboro, came to Wright State for its flexible scheduling, since he referees football and needs to be able to drive home for games, as well as its affordability and campus.

One of Palmer’s high school teachers was a part of Wright State’s Model UN Program and encouraged Palmer to join. During his first semester as a freshman, Palmer interviewed for the program and made the team.

In his sophomore year, Palmer served as director of academic affairs in the Student Government Association. The next year, David Baugham asked Palmer to be chief policy officer, but instead, he was named chief justice after a resignation from the position.

“That was actually a blessing because I was able to do exactly what I loved, going up to Columbus and lobbying and working on bills and legislative action,” he said.

Palmer said that testifying in front of the Ohio House of Representatives and Senate has been one of the best experiences of working in Student Government. He has also met Ohio Gov. John Kasich and Attorney General Mike DeWine.

During his time in Student Government, Palmer said he has considered the idea of running for president, but originally hadn’t been planning to act on it. Then he walked around campus and talked to students about their concerns.

“Just walking and talking to people really encouraged me,” he said. “I might not have all the answers, but if we can give students the voices they need and push their idea along, let’s do it.”

One of Palmer’s goals is to beautify the campus. He is working with Greek life to improve the amphitheater near the Medical Sciences building so sororities and fraternities can use it for their events. In addition, Greek life members can earn service hours by maintaining the amphitheater.

“We can have a strong sense of pride in the campus,” Palmer said. “It’s a recruitment tool if we have a stage where people can hang out and have events.”