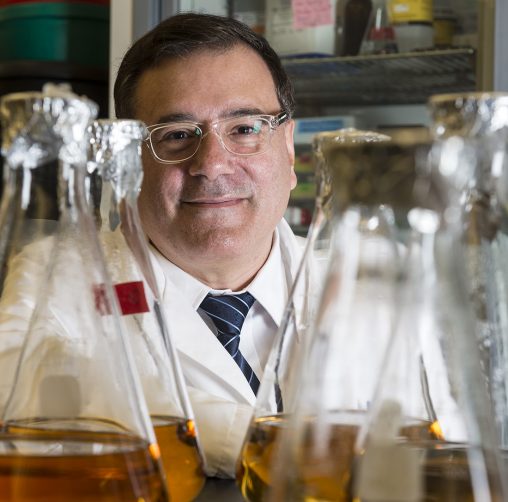 Julián Gómez-Cambronero was professor of biochemistry and molecular biology at Wright State University.

Julián Gómez-Cambronero, an acclaimed Wright State University cancer researcher whose scientific contributions made him a hometown hero in his native Spain, died on Nov. 12 at the age of 59.

Cambronero, a professor of biochemistry and molecular biology, is survived by his wife, Teresa Madrid, and his two children, Julia and David.

“My heart has been broken into as many pieces as there are stars in the cosmos,” she said. “I love you until the numbers stop, Dad. Say ‘hi’ to Carl Sagan for me.”

Family and friends are invited to celebrate Cambronero’s life during a funeral Mass at 10:30 a.m. on Friday, Nov. 30, at Immaculate Conception Church, 2300 Smithville Rd. in Dayton.

Cambronero grew up in Manzanares, a municipality in Ciudad Real, a city of 75,000 in the famed La Mancha region of Spain.

He earned his Ph.D. in biochemistry and immunology at the Complutense University in Madrid in 1986 and immigrated to the United States after being granted a rare “Einstein Visa,” which is reserved for respected academic researchers and people highly acclaimed in their field.

While at Wright State, Cambronero discovered a key protein that plays a critical role in the development of breast cancer tumors and the spread of the disease to the nearby lungs.

Cambronero secured more than $6 million in research funding from National Institutes of Health, the American Heart Association and other agencies. He authored about 100 peer-reviewed publications, presented more than 60 abstracts at various conferences and reviewed manuscripts for more than 20 scientific journals and for the NIH.

Due to the importance of his research, Cambronero was named honorary professor at Southern Medical University in Guangzhou, China, in 2012 and in 2013 was awarded the title of Brage Golding Distinguished Professor of Research in 2013 at Wright State.

In 2015, he received a prestigious visiting scholar position at Harvard Medical University along with a multimillion-dollar grant from the National Institutes of Health.

The visiting professorship enabled Cambronero to tap into world-class expertise (with Harvard researchers Charles Serhan and Gregory Stahl) as well as models and equipment at Harvard to investigate a technique used in ischemia/reperfusion injury, in which tissue is damaged when blood supply returns to it after a lack of oxygen, and the role of inflammation.

Cambronero always maintained a close relationship with his native Spain, returning often and underscoring the importance of family ties and cultural roots. He received the Professional Achievement “Sembrador” Award from the City of Manzanares in 2004, was named as the city’s “Hijo Predilecto” (Favorite Son) in a grand ceremony in 2014 and was the keynote speaker in the Patron Saint festivities in 2016.

Although Cambronero dedicated his life to the sciences, his days were also filled with various hobbies. He seemed to always have a digital camera in his hand, taking photos of the world around him. He relished nature and the outdoors and would sometimes take siestas on his porch swing amongst the trees.

He also loved music. While writing scientific papers, working on grants or sending cultural commentary articles to his Spanish hometown, he would play everything ranging from the Beatles to Vangelis to Enya.

And at dinners with family and friends, Cambronero would invoke his “Cultural Minute” — when everyone at the table could critique and discuss popular or historic cultural events or phenomenon.

One of Cambronero’s legacies is his “Walk through the Solar System,” a scale model of the Solar System in his native Manzanares, with representations of the sun and the planets positioned along a path in a public park. He leaves behind the unfinished project of a science museum for children, inspired by his belief that early childhood education is fundamental in creating the researchers of tomorrow.

“I have shared in my writings the passion and awe for the wonderful world of nature and the scientific discoveries with the general public and especially with children,” Cambronero said in a 2017 interview. “They themselves are ‘scientists’ as they always ask the nagging question ‘Why?’ and then ‘But why?’ after a first answer is insufficient. All of this is at the core of what we as professional scientists do every day in trying to understand the inner workings of nature.”