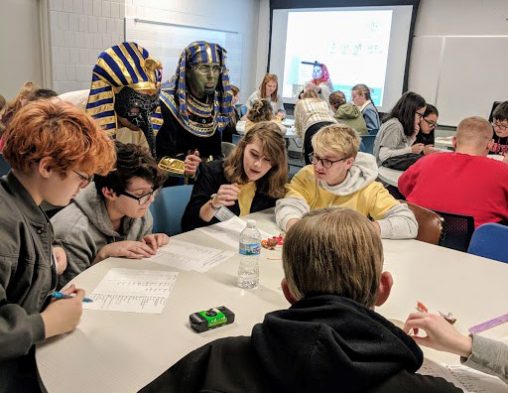 High school students were welcomed to Wright State University in Latin. They split up into groups named after Roman leaders. They deciphered hieroglyphics and learned about the fall of Rome. All of this took place during the morning of Latin Immersion Day on Nov. 10.

Latin Immersion Day, hosted by the Department of Religion, Philosophy and Classics in the College of Liberal Arts, encouraged local high school students who are learning Latin to visit Wright State, where they heard about various aspects of Roman culture from professors in the department.

Ava Chamberlain, chair of the Department of Religion, Philosophy and Classics, said the goal of Latin Day is to promote the study of classical literature and languages.

“Latin is not a dead language in the Miami Valley,” she said. “We want to support high schools that teach Latin, and this is a great way to do it.”

Rebecca Edwards, associate professor of classics, said she attended Latin Days while she was in high school and she always looked forward to them. She hopes the students who attend Latin Day at Wright State feel the same enthusiasm.

“Latin Day is not only a great experience for high school students, but it is also an opportunity for Wright State Latin students to interact with each other and younger students taking Latin,” she said.

Students in Latin programs from Carroll, Kettering Fairmont, Butler and Northwestern high schools and students from a homeschooling consortium attended.

Throughout the day, groups visited several professors who created presentations and activities for them. They listened to lectures about Roman battle tactics against the Carthaginians and invasions of barbarians at the fall of the Roman Empire. Other professors educated the students on building a Roman villa and how to read hieroglyphics.

“They really go all out for this,” Edwards said. “It’s fascinating to see what everyone comes up with.”

Rebecca Riffle, a Latin teacher at Kettering Fairmont High School, said she is always excited when her students come to Wright State.

“Coming to college is really good for my students,” she said. “They can see the college and they get to work on solving bigger problems.”