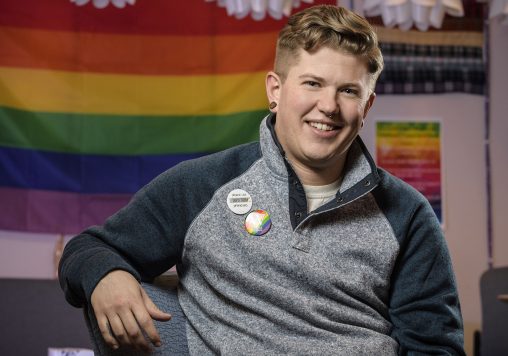 Petey Peterson, director of LGBTQA affairs, will be recognized by the American College Personnel Association and its Coalition for Sexuality and Gender Identities during its annual convention in Boston. (Photo by Erin Pence)

Petey Peterson, director of LGBTQA affairs at Wright State University, will be recognized nationally for inclusive efforts that include helping create a formal preferred-name change process, gender-inclusive housing and all-gender restrooms in every major building on campus.

Peterson will receive one of only two Voices of Inclusion awards from the American College Personnel Association in March at its annual convention in Boston. Peterson will also receive a service award from the association’s Coalition for Sexuality and Gender Identities.

The Voices of Inclusion award honors members who use their strength, expression and advocacy within and beyond the positions they hold to make their campuses, the association and the field a more equitable, inclusive and just place.

“The nomination we received for you made clear that you are passionate about equity and inclusion, and creating and sustaining a community of support for marginalized people in our field,” Windi Sasaki, director of equity and inclusion for the American College Personnel Association, said in an email to Peterson.

“I really can’t think of a bigger more humbling honor because I really value the leadership of that association,” said Peterson. “And especially because it’s focused on inclusion. That’s one of my biggest personal and professional values.”

Peterson (pronouns: they, them, theirs) grew up in Iowa City, Iowa, and became interested in pursuing a career in social work, in part because of the community service component of Catholic education.

The shift to student affairs came after Peterson became involved in student leadership, including serving as president of the Iowa State University’s LGBTQA student organization. As part of the master’s program, Peterson served as a graduate assistant for the Women’s Center at Iowa State.

“I knew then I wanted to do identity/cultural center-based work,” Peterson said.

Peterson then landed a job at Vanderbilt University as program coordinator in the LGBTQI Life office, which had a robust budget and staff.

“I got the opportunity to see what an LGBTQA office could do beyond the bare basics,” Peterson said. “I could see all the different layers of what we could do and how we could impact the campus.”

After three years at Vanderbilt, Peterson longed to return to a state school, become a director of an LGBTQA center and saw an opportunity at Wright State to develop a center from the ground up.

Peterson said Wright State is a special place because students are seen as individuals and they are supported, engaged and challenged as individuals.

After joining the staff at Wright State in 2015, Peterson began shaping and branding the LGBTQA center, changing the LGBTQA resource room in the Student Union to a Community Engagement Room.

Peterson also further developed and updated the curriculum for the Safe Space Ally Development Network, which provides training in active-bystander intervention and a network of support for the emotional, psychological, social and physical well-being of the LGBTQA+ community.

In addition, Peterson strengthened the Our Voice Panel Program, which involves panelists of students, staff and faculty sharing their experiences and perspectives in the LGBTQA+ community.

“Maybe you’re someone from rural Ohio who has never met an LGBTQA+ person and maybe actively feel negatively about them,” said Peterson. “It’s a little harder to feel that way when you’ve now seen seven people who look more like you than not, who came from your same high school or maybe like some of the same things as you.”

Peterson’s staff has grown from one graduate assistant to two as well as three to five student employees each semester.

Under Peterson’s leadership, the Wright State housing application form now includes an extra set of questions that enables applicants to agree to room with students of any gender identity. And a set of all-gender restrooms have been designated in all campus buildings, making Wright State one of the few universities to have such an extensive array.

Peterson said the all-gender restrooms are designed to be safe and reflective of the identities of both the transgender and non-binary community, people whose gender identities don’t match their assigned sex at birth, those who don’t necessarily identify as male or female, or those who identify as both.