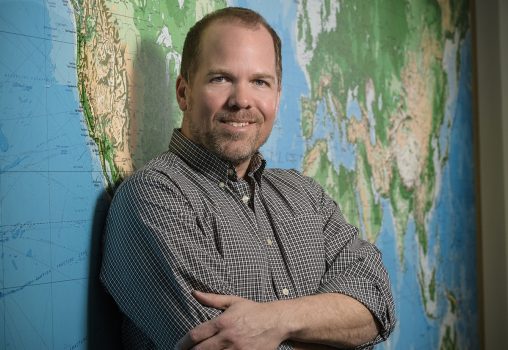 Vaughn Shannon, associate professor of political science, was elected to a two-year term as president of the Dayton Council on World Affairs.

The Dayton Council on World Affairs, which has been educating the region on international issues for 70 years, strengthened its ties with Wright State University with the election of Vaughn Shannon as president.

“My calling is to make sure citizens are educated on international affairs so they can make informed choices,” said Shannon. “The council’s mission is nonpartisan educational programming to make sure people understand world affairs. It’s so important and dovetails with my profession.”

Shannon was elected to the two-year post in January following stints as treasurer and vice president. He is in charge of day-to-day operations as well as promoting the council’s mission and vision.

“For me that’s my passion — making sure Dayton is aware that we provide programming and events to talk about current events and things of importance,” he said.

Founded in 1947 as the Cold War began, the nonprofit, nonpartisan Dayton council operates in linkage with the World Affairs Council of America. It is one of about 90 U.S. chapters and one of the oldest. The council’s mission is to promote informed opinion and decision-making concerning international issues by engaging people on diverse world issues, points of view and cultures. It offers residents direct contact with key international figures and fosters discussion of issues such as world trends in economics, security, human rights, terrorism and peace initiatives.

The council holds annual meetings, usually at Sinclair Community College, and often brings in well-known speakers. Recent speakers have included Colin Powell, former secretary of state and chairman of the Joint Chiefs of Staff, and Sid Davis, a radio reporter who was in the presidential motorcade when President John F. Kennedy was shot in Dallas and the first journalist to report that Vice President Lyndon Johnson had been sworn in.

The council also sponsors the Great Decisions world affairs discussion series at the University of Dayton, at which Shannon has spoken several times.

“We have made great inroads at the universities, a source of knowledgeable people on international affairs,” said Shannon.

The council also has strong relationships with the Dayton International Peace Museum, the Dayton Sister City program and Welcome Dayton, which promotes immigrant integration into the region.

There are currently more than 35 international companies located in the Dayton area, representing more than a dozen countries. In addition, many of the universities as well as Wright-Patterson Air Force Base have strong international connections.

“One of the things we try to do is show the local connection to global experiences,” said Shannon. “We want to do our own programming, but we also want to be a hub for information of everything international in the Dayton area.”

There are more than 100 members of the council, which has a 15-member board and five-member executive committee. It is one of the few chapters to have a Junior Council on World Affairs, its student wing that is made up of clubs from 14 area high schools.

The junior council competes in the Thomas V. Pearson Academic Quiz Bowl, a contest of knowledge in current events, history, literature and other areas, and helps sponsor the winning team at the annual national competition in Washington, D.C. The Dayton council also annually awards the Pfeife Smith Scholarship, totaling $4,000, to an area high school student who agrees to attend a Dayton-area university.

In addition, the council participates in Wright State’s annual International Friendship Affair, a festival that celebrates the university’s foreign students and its relationship with Dayton’s diverse international community.

Shannon sees himself as carrying on the tradition of Wright State’s leadership at the council and helping bring the world to Dayton’s doorstep.

“It’s amazing how such a small Midwestern city is so globally connected,” he said. “So it’s vitally important to be knowledgeable about international affairs.”