Deere to her heart 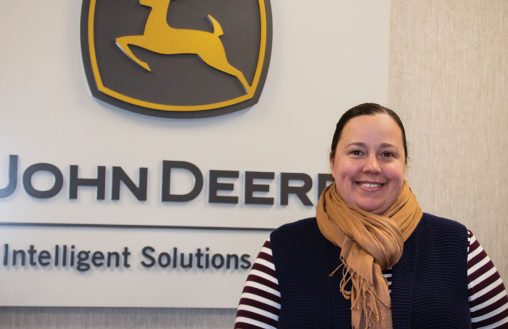 Elizabeth Conzo-Kershner, who graduated from Wright State with a bachelor’s degree in economics, leads analytics in precision agriculture at John Deere.

Growing up on a dairy farm in central Ohio, Elizabeth Conzo-Kershner ’00 had to be an early riser to get her chores done. That hasn’t changed much. Even today, the Wright State University alumna is in her office in Des Moines, Iowa, by 6 a.m.

The difference is that Conzo-Kershner now leads analytics in precision agriculture at John Deere, a Fortune 500 company with a rich history that manufactures agricultural, construction, and forestry machinery; diesel engines, axles, transmissions, and gearboxes used in heavy equipment; and lawn care equipment.

Precision agriculture is a farm management concept based on observing, measuring, and responding to field variability in the growing of crops, often through the use of satellites or drones. Sensors measure moisture and nitrogen levels to seed and spray at the exact levels needed to maximize yields and preserve resources.

After her early-morning arrival, Conzo-Kershner usually spends much of her day listening to project updates or giving updates to leadership. Currently, she has 14 direct reports, so she spends a lot of time in one-on-one meetings to understand progress and provide input on various projects.

The most challenging and exciting part of her job is working to keep up with technology, an ever-changing landscape.

“The most rewarding part of my job is helping individuals and teams succeed in solving problems and creating solutions,” she said. “I have the opportunity to work with amazing teams in technology and analytics. Learning from and with them on a daily basis is what keeps me where I am.”

Conzo-Kershner has been working in or leading analytics teams at John Deere for 15 years in manufacturing and sales marketing. She helped develop and inject predictive modeling into Deere’s sales and operations planning process and led the establishment of processes and models to support inventory optimization.

Conzo-Kershner grew up in Marysville, Ohio, graduating from Fairbanks High School in 1997. She enrolled at Wright State after receiving a full valedictorian/salutatorian scholarship to study applied economics.

Along the way, she was active in campus leadership, serving as president of Student Government and treasurer of the Zeta Tau Alpha sorority. She was also a member of the economics club and Model UN.

“I am grateful for the leadership opportunities in multiple organizations,” she said. “I also found the faculty to be incredibly accessible during my time at Wright State.”

“She is an admired alumna for what she did as a student, and also for how successful she has been in the business world,” said Holley Mapel ’19, former student body vice president, 2017–18. “I’m grateful for her continual support by being a donor to the SGA scholarship fund and proud champion of Wright State.”

Conzo-Kershner also had a very heavy hand in getting a Student Government scholarship established when she was a student and helping to get it endowed in 2018.

On a more personal level, she has established a scholarship named in the memory of her late brother, Jacob Repasky, who passed away before finishing his college career. The scholarship provides financial support to students who are engaged in extracurricular activities while pursuing business and economics degrees, but particularly for female students. Her initial intention with the scholarship, she said, was to also encourage more leadership opportunities and advancement for women in economics.

“I firmly believe that my opportunity to participate in these activities helped prepare me for the job market and allowed me to build a diverse network of contacts and friends,” said Conzo-Kershner. “I’m hopeful that the scholarship can allow others to free up some time to participate in campus groups.”

After graduating with her bachelor’s degree in economics in 2000, Conzo-Kershner went to Washington, D.C., where she worked as an economist in the U.S. Department of Commerce. She later returned to the Midwest, where she worked for four years as an assistant director in the Fisher College of Business at The Ohio State University.

Conzo-Kershner’s passion at that time was econometric forecasting, so she began looking for jobs with companies that were applying that in their core processes. That led her to a position at John Deere, which was seeking an entry-level forecaster. 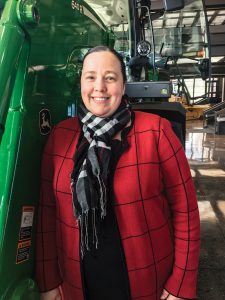 Elizabeth Conzo-Kershner helped establish a Student Government scholarship when she was a student and to get it endowed in 2018.

Over the next 15 years, Conzo-Kershner was given the opportunity at John Deere to apply her passion for analytics across multiple functions and around the world.

Conzo-Kershner has been back on Wright State’s campus several times to serve as an advisor on the Raj Soin College of Business Corporate Advisory Board. In 2017, she visited Rike Hall to speak to a group of students about her role at John Deere, but also her time at Wright State. Her one key piece of advice to students was to “enjoy college, [but] take advantage of opportunities to be a leader that getting involved in student organizations can provide.”

“Liz was a breathtakingly impressive student — highly intelligent and motivated, she was a natural leader who served as a role model for students in the Raj Soin College of Business and across campus,” said Thomas Traynor, interim dean of the Raj Soin College of Business. “Liz is a very successful alumna who I am very happy to now have as a part of our college’s corporate advisory board.”

Conzo-Kershner has words of wisdom for students, especially women, seeking leadership positions in the corporate world.

“Always keep learning, humbly take credit when it’s due, and be careful not to sign up for too many unpromotable tasks,” she said. “And always ask for what you want.”