2012 grad returns to Wright State to give English workshop 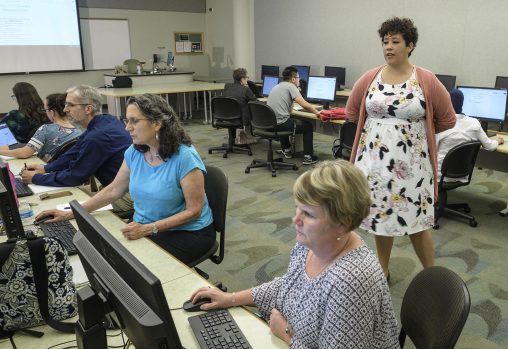 Wright State graduate Ashley Velazquez, an assistant professor in the School of Interdisciplinary Arts and Sciences at the University of Washington-Bothell, returned to campus to give a workshop on the Corpus and Repository of Writing (Crow) interface. (Photo by Chris Snyder)

Faculty from the Wright State LEAP (Learning English for Academic and Professional Purposes) Intensive English Program and faculty and students in the M.A. in Teaching English to Speakers of Other Languages (TESOL) Program learned how to use the Corpus and Repository of Writing (Crow) interface to teach English to international students during a workshop in Millett Hall on June 18.

Using former student texts, Crow is a resource for instructors to find authentic writing patterns that may be useful for lessons in grammar, citations and revisions. It can also be used to help instructors teach students how to avoid using common signal phrases and transition words, by using former student submissions to point out where the phrases are most commonly used.

Students can use Crow to learn how other undergraduate college writers, like themselves, handle writing on similar topics and in similar situations. By entering a word or phrase, students can access excerpts from submitted student texts in seconds.

Hosting the workshop was Ashley Velazquez, a Wright State alumnus who will join the University of Washington-Bothell’s School of Interdisciplinary Arts and Sciences as an assistant professor this fall.

Velazquez graduated from Wright State in 2012 with a master’s degree in English-TESOL. She taught as an adjunct instructor in the LEAP Program before pursuing her Ph.D. in second language studies, with specializations in second language writing, corpus linguistics and rhetoric and composition, at Purdue University.

Velazquez said growing up in a multilingual household sparked her interest in teaching second language writing.

“I grew up in a multilingual household, and I picked up Spanish as a second language,” said Velazquez, who returned to Wright State to organize the workshop. “I think later on I realized the influence that had on my decisions on my career and how I teach.”

Velazquez believes the ability to show students writing samples from both domestic and international students makes Crow an exceptional resource.

“In this case, ours is a learner corpus, which currently provides examples from international students and in the future will include examples from domestic students,” she said. “So students from diverse linguistic backgrounds will be able to find themselves in those texts and see examples that they can relate to.”