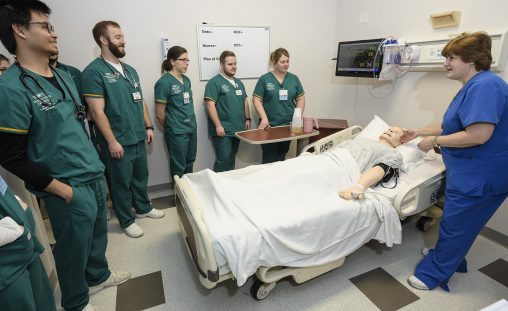 The Wright State University College of Nursing and Health has been ranked third in Ohio for the quality of its nursing programs.

Wright State University-Miami Valley College of Nursing and Health is ranked the Number Three Accredited Nursing School in Ohio for 2019 by Nursingprocess.org.

“We are proud to be recognized for offering quality nursing education and providing competent nursing professionals to the Dayton and Lake Campus regions, and throughout Ohio,” said Deborah L. Ulrich, interim dean of the Wright State College of Nursing and Health. “Our faculty provide an exceptional curriculum and lab simulation, while our community partners offer clinical experiences that prepare our students for a multitude of nursing roles.”

Wright State’s current pass rate on the NCLEX licensure exam is above 97 percent, while the state average sits at about 87%. The graduate certificate pass rates also are well above state averages, with some at 100%.

Nursingprocess.org established the rankings after thoroughly evaluating nursing schools across the state that met specific requirements. The schools must offer baccalaureate and graduate-level nursing programs that have been both approved by the state Board of Nursing and accredited by the Accreditation Commission for Education in Nursing (ACEN) or the Commission on Collegiate Nursing Education (CCNE).

Wright State’s baccalaureate degree in nursing, master’s degree in nursing and doctor of nursing practice are accredited by CCNE. The pre-licensure programs have full approval from the Ohio Board of Nursing.

“If you want a well-rounded nursing education where what you’re taught in classroom lectures is reinforced by labs and other experiential learning opportunities, check out the Wright State College of Nursing and Health,” the rankings stated.

Nursingprocess.org also highlighted Wright State’s patient simulation lab, which is set up to resemble a hospital unit with functioning equipment and high-fidelity mannequins. Ulrich said the mannequins are extremely realistic and have become an important part of nurse education today.

Patient simulation allows educators to recreate important, but rare, clinical situations that most students would not experience if left to clinical encounters. It also enables educators to create high-risk situations in a nonthreatening environment, with no risk to patients.

The ranking noted that Wright State’s traditional nursing curriculum is enlivened by unique electives, such as a disaster preparedness class and a course called The Power of Nursing, which helps student nurses explore the personal significance of their work. 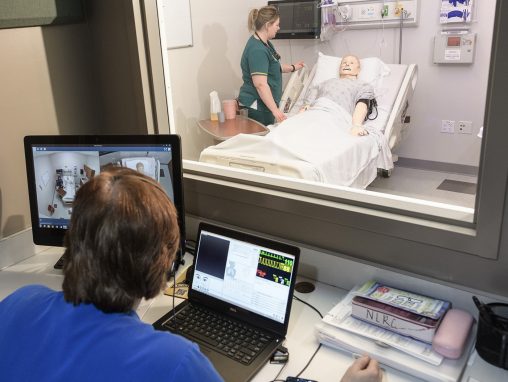 Wright State’s patient simulation lab enables educators to create high-risk situations in a non-threatening environment, with no risk to patients.

A rapidly aging population means that the number of jobs available to graduates of accredited nursing schools in Ohio is growing faster than the average for all other types of jobs, according to the organization. By 2020, Ohio will have a nursing shortage estimated to be approximately 32,000.

With the Institute of Medicine calling for nurses to hold at least a bachelor’s degree in nursing by 2020, the B.S.N. becomes the most sought after entry-level nursing program, according to Nursingprocess.org. Graduate-level programs offer nurses an opportunity to advance their education and enhance their careers.

The rankings were based on the following factors and weightages.

Data was collected from the following sources: